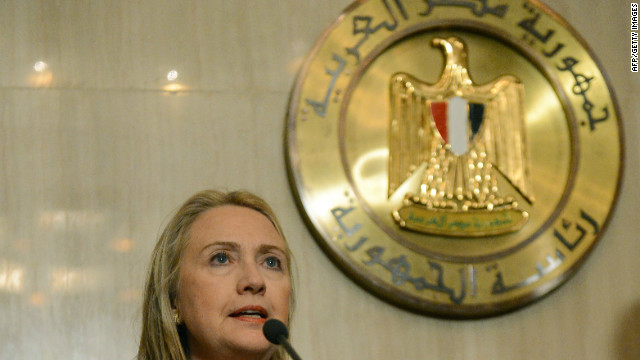 DEVELOPING: CEASE-FIRE REACHED IN GAZA CONFLICT… After more than a week of violence between Israel and Hamas, a cease-fire Wednesday promised to silence the warplanes and rocket launchers and restore a tense peace to the troubled region. The cease-fire, announced in a joint news conference in Cairo with Secretary of State Hillary Clinton and Egyptian Foreign Minister Mohamed Kamel Amr, took effect at 9 p.m. (2 p.m. ET). … Israel launched the conflict eight days ago with a stated goal of ending the frequent rocket attacks on southern Israel from inside Gaza. Hamas officials have termed it a criminal expansion of Israel's occupation of Palestinian territory.

“The constituents of the Second District deserve a full-time legislator in Washington, something I cannot be for the foreseeable future,” Jackson wrote in his resignation letter. “My health issues and treatment regimen have been incompatible with service in the House of Representatives. Therefore, it is with great regret that I hereby resign as a member of the United States House of Representatives, effective today, in order to focus on restoring my health.”

Gut Check Full Service… Governor Pat Quinn announced today “Within five days, I will set forth a schedule for a special election to allow the people of the 2nd District to choose a new member of Congress to represent them in Washington. This election will be carried out in a manner that is fair to the electorate and as economical as possible for taxpayers.”

TRAIL TRIVIA
(Answer below)
In what year did the United States first celebrate two thanksgivings and why did this happen?

Joe Klein’s column today is must-read journalism. Klein has a way for words, and is often hard to quote, for his precision in language makes it impossible to splice his cohesive argument.

Nonetheless, we want to leave you with some of his reflections on 2012 as they seem appropriately timed for this Thanksgiving weekend. Klein starts by writing about Mitt Romney’s post-election call with donors, in which the former Republican nominee divides America into makers and takers. Then, Klein issues a challenge to America to confront the raw political divide exposed by this campaign.

“There are sore losers in every election. But the quality of the carping is different this time. The sense that a ‘traditional’ America is being supplanted by something foreign—an amalgam of Greece and Kenya, perhaps—seems to have only intensified since the election. The fantasy that the Obama coalition supports ­ ‘socialism’ was raised, mournfully, by William Bennett, who cited a 2011 Pew poll. The poll exists. Blacks, young people and liberals all copped to more positive feelings about ‘socialism’ than ‘capitalism.’ But I wonder, what do these people think socialism is? … I suspect—and this would be wonderfully ironic, if true—that all those blacks and young people got their definition of socialism from Rush Limbaugh and the other wing-nut foghorns: socialism is when the government helps people out.”

Klein continues, “What we’ve decided in this election is that most people are comfortable with a regulated free-enterprise system in which the government helps provide education and health care for everyone and financial support for those who need it most, especially the elderly. What we’ll continue to debate is how extensive those regulations and supports should be. …

“Perhaps, as a gesture of good faith, the rest of us—those unthreatened by a polychromatic, polymorphic future—should listen to their more reasonable arguments, especially the ones that involve personal responsibility. Perhaps we should begin to think about ways that people who receive benefits like unemployment insurance, food stamps, even disability, can also give back. Because citizenship in a healthy democracy comes with responsibilities, and too many of us, of all incomes, haven’t been responsible enough.”

Let us know your thoughts at gutcheck@cnn.com. We are thankful for an engaged, thoughtful readership, and relish the reasonable dialogue in our Inbox thanks to people like you.

Leading CNNPolitics: Boehner: Obamacare on table for 'fiscal cliff' talks
As congressional leaders and President Barack Obama search for common ground to tame the national debt as the weeks dwindle down to end of the year, House Speaker John Boehner said the Affordable Care Act, often referred to as Obamacare, must be included in deficit negotiations. “We can't afford it, and we can't afford to leave it intact,” Boehner wrote of Obama's signature healthcare initiative in the Cincinnati Enquirer. “That's why I've been clear that the law has to stay on the table as both parties discuss ways to solve our nation's massive debt challenge.” – Dana Davidsen

Leading HuffPo: What Went Wrong?
It’s been just two weeks since The Most Important Election In Our Lifetime, and the side that lost is gearing up to be a better competitor by the time the next Most Important Election In Our Lifetime happens, in 2016. But first, there comes a period of soul-searching. What went wrong? And who went the wrongest? – Jason Linkins and Sabrina Siddiqui

Leading Politico: Republicans, 2016: In full swing
Tired of presidential politics? Get over it: Upwards of 15 prominent Republicans are privately contemplating 2016 campaigns for the presidency — and the most serious and ambitious of the bunch are already plunging in, some quite publicly. Don’t expect them to officially announce or even officially decide for many months. But Sen. Marco Rubio (R-Fla.), Louisiana Gov. Bobby Jindal and House Budget Chairman Paul Ryan (R-Wis.) are doing nothing to disguise their presidential ambitions. – Jim Vanehei and Mike Allen

Leading The New York Times: Members of the 112th Congress Depart, Taking Their Quirks Along
Oh, how much will be missed on Capitol Hill next year, when more than 80 current members depart, half of them involuntarily. Say goodbye to the foreign policy expertise of Senator Richard G. Lugar of Indiana, to the institutional knowledge of many in the California delegation and, perhaps most sadly of all, to Senator Kent Conrad’s bichon frisé. – Jennifer Steinhauer

- Hamas denies credit for Jerusalem bomb, but praises attack -
IN AN EXCLUSIVE INTERVIEW IN CARIO, CHRISTIANE AMANPOUR SPEAKS WITH HAMAS’ POLITICAL LEADER KHALED MESHAAL…
Amanpour: There has been a terrible attack inside Israel today, in Tel Aviv – the first of these kinds of attacks in six years. A bomb on a bus, and there have been many causalities. Does Hamas claim responsibility? Did Hamas do that?
Meshall: This question must be addressed to Netanyahu.
Amanpour: No, no, I’m asking you - did Hamas claim responsibility, did Hamas do that?
Meshall: Not Hamas, not others, not other people from, not Hamas. No one can announce except those who committed, not me. The lesson is what matters. What led to this? Who created the circumstances that led to this operations? It is Netanyahu with his crimes, in killing the kids of Gaza, and the continuity of aggression. He create such ramifications everywhere. This could lead to any kind of reaction as retaliation for what happened in Gaza.

- Israeli government spokesman: Quiet is victory -
Mark Regev, Israeli Government Spokesman, in an interview with CNN’s Wolf Blitzer: “The understanding we've reached against the Egyptians with the sponsorship of the United States say clearly a total and complete cessation of all hostile activity initiated in the Gaza Strip, and that's very important. That means no rockets on Israeli cities, no shooting at Israeli farmers from across the border. Total and complete quiet. These arrangements, for us, that is victory. That is what we wanted.”

- It all rests on Morsy and the will of the Egyptian people -
GEORGE MITCHELL, FORMER U.S. SPECIAL ENVOY TO MIDDLE EAST, SPEAKS ABOUT EGYPTIAN PRESIDENT MOHAMED MORSY IN AN INTERVIEW WITH CNN’S SUZANNE MALVEAUX: “It's not our responsibility to select the leaders of other governments, and whatever our views, he has been chosen by the people of Egypt in a free and fair election, so we, in accordance with our own principles and the right of self-governance, deal with that. I have to say he has clearly recognized Egypt’s national interests here. … Remember, this is not the first time this has happened. Egyptians have been deeply involved in this for a very long period of time. I think it will only go down to his benefit both domestically and around the world. His success or failure will rest upon how well the people of Egypt feel their interests have been met in terms of the need for jobs, for education – the same thing that people want everywhere in the world.”

- Limbaugh: “I always do try to tell the truth” -
RUSH LIMBAUGH IN HIS SYNDICATED RADIO SHOW: “The White House is now claiming that it was the office of the Director of National Intelligence, James Clapper's office, that edited any mention of terrorists from the talking points that was given to Susan Rice. And then she went on the TV shows. The only problem with that is that almost a week ago last Thursday Clapper told the Senate that he had no idea who edited the talking points, but the White House said yesterday that he did it. I almost feel for this guy. A, he looks like Ed Rollins. B, he's being dumped on here. You know, I sometimes have a hard time remembering what I said last week, but I am not the top officer of the entire intelligence community. I'm also not testifying under oath when I speak here on the EIB Network. I always do try to tell the truth. There's nothing to gain by lying, and I don't do that. I speak to the best of my knowledge. We all know that the orders that Susan Rice got came from the White House, and the White House is dumping on Clapper. But what's anybody gonna do to Clapper?”

The reason for two thanksgivings: money and economic growth.

The year: 1939. The president: Franklin Delano Roosevelt. The issue: shopping days until Christmas.

From 1863, when President Abraham Lincoln issued a Thanksgiving Proclamation, to 1939, the holiday was celebrated on the last Thursday in November. Lincoln’s proclamation made the date a national, annual holiday and schools and governments across the country planned accordingly.

But In 1939, when Thanksgiving was due to fall on November 30, many retailers complained that the date meant there would only be 24 days for Christmas shopping. Much like today, retail numbers jump after Thanksgiving because most people do their holiday shopping at that point.

The economy, at that point, was still slugging and recovering from the Great Depression, so Roosevelt decided to side with the retailers and moved Thanksgiving to November 23, the second-to-last Thursday of November.

Many were outraged by the change and a number of governors protested the decision and did not allow their state to change the date. In 1939, 23 states celebrated Thanksgiving on November 23 and another 23 celebrated on November 30. People in Colorado in Texas were lucky – their states honored both dates.

This split continued until 1941, when Congress passed a law stating that Thanksgiving would always be the fourth Thursday in November.

GOT TURKEY?
Our inbox awaits: gutcheck@cnn.com
Gut Check won’t be publishing tomorrow or Friday. Instead, we will be celebrating with our family, friends and loved ones. We are thankful for the most engaged readers in politics.