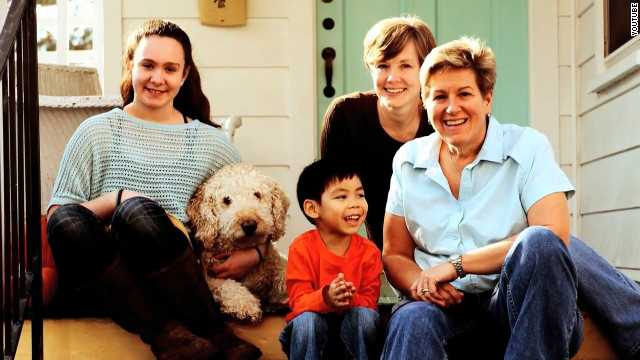 Morgan Freeman narrates the spot for the Human Rights Campaign, which asserts the ballot box victories in Maryland, Maine, Minnesota and Washington State have provided a nationwide "mandate for full equality."

"America stands at the dawn of a new day," Freeman says in the ad, which the group said would air nationwide beginning Sunday. "Freedom, justice and human dignity have always guided our journey toward a more perfect union. Now across our country, we are standing together for the right of gay and lesbian Americans to marry the person they love."

Voters in Washington, Maine and Maryland passed ballot measures on November 6 affirming the legality of same-sex marriage, while in Minnesota voters rejected a ban on those unions.

The U.S. Supreme Court is expected to decide soon whether to hear oral arguments on cases challenging the legality of the Defense of Marriage Act, which passed with overwhelming support in 1996 and was signed into law by President Bill Clinton. The act defines marriage as the legal union between one man and one woman.

"This year proved to be a pivotal turning point in the movement for marriage equality and now we press onward with renewed vigor and public opinion squarely on our side," HRC President Chad Griffin said in a statement. "As we continue the march toward full equality in legislatures and the courts, it is crystal clear that the prospect of an equal future is no longer up for debate; the question now is how soon it will arrive."

Freeman is no stranger to narrating ads for politicians and causes - the Oscar winner narrated a spot for President Barack Obama's re-election campaign in October that detailed the incumbent's first-term accomplishments. It ran heavily in battleground states.

Freeman also donated $1 million to the pro-Obama super PAC Priorities USA, writing in part that the president "has led our nation to be more tolerant and placed impressive, accomplished women on the Supreme Court."