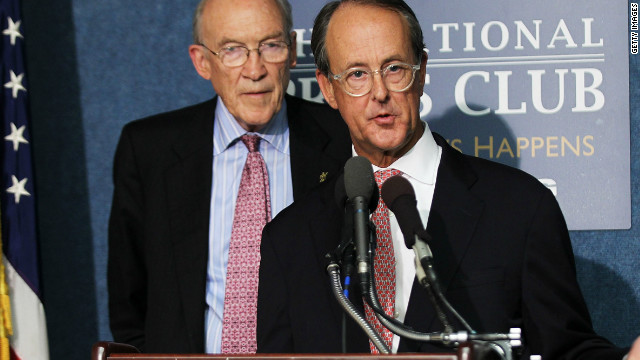 Bowles was the Democratic co-chairman of President Barack Obama's 2010 deficit reduction panel. After the commission's recommendations failed to garner enough support, Bowles and the Republican co-chairman of the group, Alan Simpson, went on to found the group Campaign to Fix the Debt.

The meeting will be attended by other business leaders associated with the group, an aide said.

That group has advanced a set of principles for debt reduction that are consistent with the principles outlined after the election by House Speaker John Boehner, one Boehner aide pointed out to CNN.

In a statement after top congressional leaders met with Obama at the White House, Fix the Debt's president Maya MacGuineas said the group "is not pushing any one plan in particular," but supports a solution which: raises revenue by tax reforms including "broadening the base, lowering rates and closing loopholes;" as well as reduces "wasteful" federal spending and reforms entitlement spending.

The meeting will be hosted by Majority Whip Kevin McCarthy, R-California., an aide to McCarthy said. The GOP Whip has held separate discussions with small business groups on the fiscal cliff.

In a statement on the upcoming meeting, Boehner said, "People in both parties agree we need a 'balanced approach' to deal with our deficit and debt and help our economy create jobs. As we've seen in recent days, the American people support an approach that involves both major spending cuts and additional revenue via tax reform with lower tax rates. We look forward to talking to Mr. Bowles and other members of the coalition about their ideas to avert the 'fiscal cliff' without tax hikes that target small businesses and cost jobs."

Obama met separately with business and labor leaders earlier this month at the White House.

Since the meeting at the White House on the Friday before Thanksgiving, the discussions on Capitol Hill have been mostly at the staff level, but Obama did call Boehner and Senate Majority Leader Harry Reid, a Democrat, on Saturday. So far there are no plans for another meeting of top leaders and the president at the White House.

The fiscal cliff is a collection of spending cuts and tax increases that are scheduled to take effect in the new year absent congressional action. Economists predict going off the cliff would put the U.S. economy into recession.

- Rep. Capito to run for Senate in West Virginia