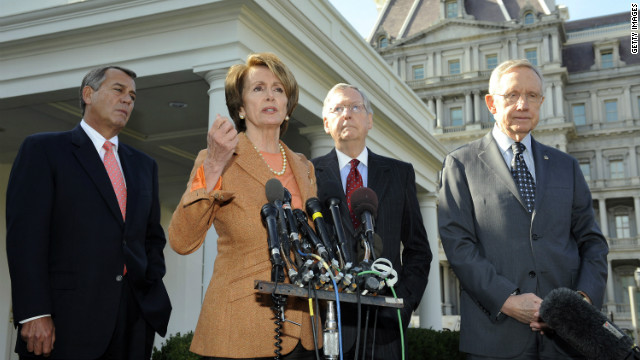 Washington (CNN) - Talks to avoid the so-called fiscal cliff are expected to pick up this week as Congress returns to work.

But a promised second White House meeting on the crisis between President Barack Obama and top congressional leaders still has not been scheduled – a possible sign that staff discussions over the Thanksgiving recess did not yield the progress leaders hoped.

“The talks in the last week haven’t been tremendously productive,” said a Senate Democratic leadership aide who described the main sticking point as the refusal of Republicans “to get specific about what they would accept in terms of revenues.”

Obama met with congressional leaders on November 16. Afterward, the Republican and Democratic lawmakers voiced support for finding an agreement in a rare show of bipartisanship.

Staff talks were supposed to lead to a second White House meeting this week but only if they made enough progress on a draft proposal that would be reviewable by the chief negotiators.

The Democratic aide said negotiations are not at a point “where people are huddled in a conference room with spread sheets” but are instead at the early “dancing stage” of negotiations.
Most of the talks over the recess took place over the phone but a few occurred in one-on-one in-person meetings on Capitol Hill, according to multiple aides.

Despite the negative read-out from the Democratic aide, congressional Republican leadership aides declined to characterize the state of the talks which are being spearheaded by aides to Obama and House Speaker John Boehner, but also include other congressional leaders.

One GOP aide accused Democrats who are not central to the negotiations of leaking details of the talks in order to portray Republicans negatively. Another GOP aide noted that the talks are continuing, which itself can be read as progress.

The White House said on Monday the president reached out on Saturday to Boehner and Senate Democratic Leader Harry Reid to touch base about their efforts to avert the crisis.

Fiscal cliff is a term used to describe the combination of mandated spending cuts and tax increases set to take place at the end year that economists warn could wipe out the fragile economic recovery.

Wall Street is concerned that negotiations will not resolve the matter, prompting key business leaders to lobby Washington for a deal.

Democrats insist the top marginal tax rates return to the higher levels that existed before tax cuts that were enacted during the George W. Bush administration.

Almost all Republicans oppose a higher tax rate but several have said they would accept higher revenues if they came from eliminating deductions and other loopholes in the tax code and were coupled with entitlement reforms.

While some Democrats have said they are open to changes in the Medicare program, there is little appetite to make Social Security reform part of the fiscal cliff negotiations because Democrats argue the program is self-funded and doesn’t add to the deficit.

Meanwhile, distrust between the parties is making negotiations more difficult.

Democrats said they were concerned Republicans would want to lock in spending cuts now in return for promises of tax reforms next year that might never materialize.

And Republicans said they were concerned that Democrats want to lock in tax hikes now in return for spending cuts next year that might never happen.

On the Senate floor on Monday, Reid and Senate Republican Leader Mitch McConnell continued to dance.

“The question is what are we going to do about this?” asked McConnell. “How do we face up to fiscal irresponsibility and can-kicking that got us here and finally do what’s right for this country?”

Reid said: “I remain optimistic that when it comes to our economy – when it comes to protecting middle class families from a whopping tax hike January First – Republicans and Democrats will be able to find common ground.”