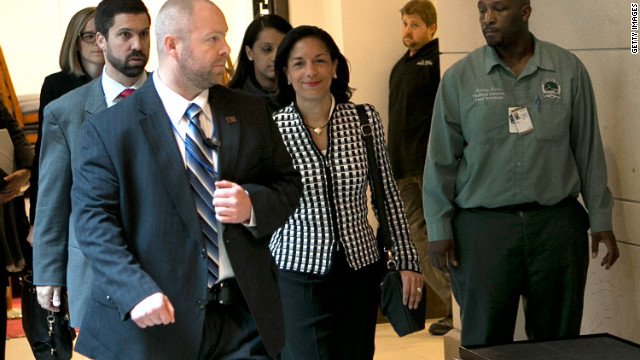 Collins, speaking after a meeting with Rice on Capitol Hill, said Rice was playing a political role when she appeared on television to explain the attack that left four Americans dead stemmed from protests of an anti-Islam video. That video now appears not to have been a factor in the Benghazi attack.

"I still have many questions that remain unanswered," said Collins, who is recognized as one of the Senate's most moderate Republicans. "I continue to be troubled by the fact that the U.N. ambassador decided to play what was essentially a political role at the height of a contentious presidential election campaign by agreeing to go on the Sunday shows to present the administration's position."

She also said she was not ready to confirm support for Rice should she be nominated by President Barack Obama to become the next secretary of state. While no name has yet been put forth by the White House, many speculate Rice would be a top choice to succeed Hillary Clinton in the role of the nation's top diplomat.

"I would need to have additional information before I could support her nomination," Collins said, adding she thought another potential nominee – Sen. John Kerry of Massachusetts – would be "easily confirmed by his colleagues."

Sen. Bob Corker, R-Tennessee, speaking after his meeting with Rice Wednesday, called the issue of Benghazi "a tawdry affair," and encouraged Obama to "step back for a moment" before nominating Rice to be secretary of state.

"All of us here hold the secretary of state to a very different standard than most cabinet members," Corker said.

Adding a new wrinkle to the questioning of Rice, Collins said the U.S. envoy's role in the aftermath of the Benghazi attack was particularly jarring since Rice was closely involved in the State Department's response to the 1998 embassy bombing in Africa. At the time, Rice was serving as the U.S. assistant secretary of state for African affairs.

"What troubles me so much is the Benghazi attack in many ways echoes the attacks on those embassies in 1998 when Susan Rice was head of the African region for our State Department," Collins said. "In both cases the ambassador begged for additional security."

Collins' remarks echo statements from Sen. McCain, who on Tuesday said he and fellow Republicans Sen. Kelly Ayotte and Lindsey Graham were "significantly troubled" by many of the answers they received from Rice, who met with the trio on Tuesday.

"It was clear that the information that she gave the American people was incorrect when she said that it was a spontaneous demonstration triggered by a hateful video," McCain said. "There was compelling evidence at the time that was certainly not the case, including statements by Libyans as well as other Americans who are fully aware that people don't bring mortars and rocket propelled grenades to a spontaneous demonstration."

In defending her remarks, Rice has said she was using de-classified talking points that did not reference the attack as a pre-meditated terror attack, and the spokesman for the Director of National Intelligence later said those talking points were prepared by the intelligence community, and not modified by other governmental agencies.

"When discussing the attacks on our facilities in Benghazi, I relied solely and squarely on the information provided to me by the intelligence community. I made clear that the information was preliminary," Rice told reporters last Wednesday.

Republicans have questioned why the administration used Rice as their spokeswoman, rather than an official more closely involved with the investigation. Her appearances on the five network and cable Sunday talk shows to discuss the Benghazi attacks also coincided with the meeting of the U.N. General Assembly, during which Rice has generally made television appearances.

Asked by journalists about Rice during a photo opportunity at the White House Wednesday, Obama called his U.N. ambassador "extraordinary" and said he "couldn't prouder of the job she's done."