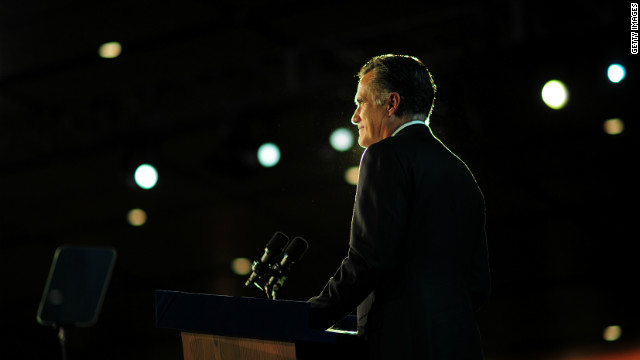 (CNN) – Stuart Stevens, a top adviser to Mitt Romney's presidential campaign, denied Thursday that Romney's loss reflected a denunciation of his ideas for the country, naming instead the two campaigns' opposing political strategies as the reason for President Barack Obama's win.

"I certainly don't think it was the ideas," Stevens said on CBS. "I think the ideas carried the day for us. And the success that we had, though it obviously wasn't enough to win the race, was based on the candidate Mitt Romney and on his ideas."

Romney's chief strategist was speaking hours before the former GOP nominee was slated to sit down for his first face-to-face with Obama following the November 6 vote. The pair will meet for lunch at 12:30 p.m. ET in the White House private dining room – a fulfillment of an election night promise from the president to hear Romney's ideas for smaller, more efficient government in person.

Stevens is slated to participate in a panel Thursday evening at Harvard's Institute of Politics featuring top campaign advisers to both Romney and Obama. In a Washington Post op-ed article Wednesday, Romney's chief strategist defended the former GOP nominee and warned against party infighting in the aftermath of the general election.

Stevens, who himself faced criticism during the campaign following media reports revealing tensions among Romney's top advisers, said Thursday that Obama's team made a concerted decision to hone in on state issues, rather than focus on the broader scope that Romney envisioned for his effort.

"That was not why Gov. Romney was running," he said. "He wanted to talk about big national issues: debt, entitlement, the future of the country. He wanted to put big questions before the country. And he did that. And I think the comparison of those two was striking."

Another boon to Obama, Stevens suggested, was the opportunity for leadership following Superstorm Sandy, which devastated parts of the East Coast the week before the election.

"I think the images of the president in the storm were very helpful to him. It reminded [voters] of what they liked about the president. It was successful," Stevens said.

While Obama's central set of campaign talking points may have helped the incumbent, Stevens said he was "baffled" by pundits tying Obama's win to his team's ground game, since the Democratic effort wasn't as successful as it was in 2008.

"They turned out more voters four years ago than they did this time," he said. "I would give them credit for their message in those states rather than just their ground game."

Nonetheless, Stevens said the Romney team could have made better inroads with female and Hispanic voters – both groups that Obama won by large margins. Saying the former Romney team has talked "a lot" about how they would have won the election, Stevens said their candidate's record on women's issues could have been better highlighted – and that in the future, Republicans should use their positions on those issues to their advantage.

"I think we have a very good message there. We just have to do a better job with it," he said.