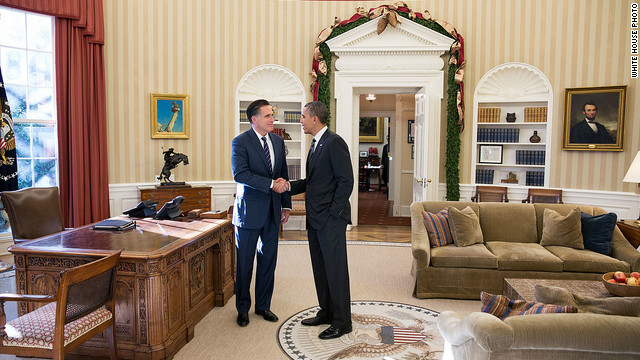 The former candidate, whose motorcade during the campaign could shut down streets and stretch entire city blocks, arrived at a side entrance of the executive mansion in a single black Lincoln SUV. He sat in the front passenger seat.

The defeated Republican presidential candidate lunched on white turkey chili and southwestern grilled chicken salad with President Barack Obama in the private dining room, where their discussion centered on "America's leadership in the world and the importance of maintaining that leadership position in the future," according to a description of the lunch from the White House.

"They pledged to stay in touch, particularly if opportunities to work together on shared interests arise in the future," read the statement from the White House, which also released a photo of the two men in the Oval Office.

The two men discussed domestic and foreign policy issues, including how to maintain America's leadership and help spur innovation, according to a Romney aide.

Anyone but Obama and Romney themselves can only speculate on the actual words exchanged Thursday, since the meeting was closed to all press. It was the first meeting between the rivals since they faced off in an often-contentious presidential election campaign, and was one of the rare moments the two actually faced each other in person. Aside from their three presidential debates, Obama and Romney met only once during the 2012 campaign, at an annual fund-raising dinner in New York on October 18.

Even before this year, the two men have rarely crossed paths, meaning their lunch Thursday is only the eighth time the pair has met face-to-face.

The meeting appeared to be a show of bipartisanship as the two men discussed how to maintain American leadership. While word of the meeting raised a bit of speculation that Romney could possibly be considered for some kind of position in the administration, there was no indication from the White House or from Romney's aides that was discussed.

The president first mentioned meeting with the former Massachusetts governor in his victory speech in Chicago on Election Night, saying he looked forward to "sitting down with Gov. Romney to talk about where we can work together to move this country forward."

And two weeks ago, at his post-election news conference, Obama brought up the potential meeting again and praised Romney's management of the 2002 Winter Olympic Games in Salt Lake City, saying "I do think he did a terrific job running the Olympics."

White House Press Secretary Jay Carney on Wednesday briefly expanded on Obama's comments, saying, "The president noted that Governor Romney did a terrific job running the Olympics and that skillset lends itself to ideas that could help make the federal government work better which is a passion of the president's. As you know he has requested re-organization authority from the Congress to do just that."

Prior to his lunch with the president, Romney met with his former running mate, Rep. Paul Ryan of Wisconsin, the House Budget Committee chairman, at a Washington hotel, a Republican official told CNN.

Following the meeting, Ryan issued a statement saying he was "grateful to Governor Romney for the honor of joining his ticket this fall, and I cherish our friendship."

"I'm proud of the principles and ideas we advanced during the campaign and the commitment we share to expanding opportunity and promoting economic security for American families," Ryan continued in the statement.

A Ryan aide said the meeting was "constructive and positive," and focused both on reflections from the campaign and on upcoming fiscal and economic challenges for the country.

Romney has mostly stayed out of the spotlight since his Election Night concession remarks in Boston, where his campaign was headquartered. While Romney hasn't made any public appearances after the election, comments he made on a post-election call that Obama had won by giving "gifts" to key constituencies were immediately criticized by both Democrats and Republicans.

A national poll out this week indicated Romney's favorable rating was down from pre-election levels, likely due in part to those controversial comments to donors two weeks ago.

Romney, who lost to Obama by 126 electoral votes, said the president courted voters by offering policies - some of them this election year - that appealed to key constituencies.

"With regards to the young people, for instance, a forgiveness of college loan interest was a big gift," said Romney.

Those remarks caused Republicans, including several who are considered possible candidates for the 2016 GOP nomination, to put distance between themselves and their party's former standard bearer.

Those comments may be a factor in the drop of Romney's favorable rating among Americans. According to a CNN/ORC International poll released Monday, 43% of the public had a favorable impression of the defeated GOP nominee, down six points from just before the election. And Romney's unfavorable rating edged up to 50%.

Discussing the lunch, a Democratic Party official who asked to remain anonymous in order to speak freely told CNN that "this is pretty magnanimous of the president, especially after Romney insulted him after the campaign to his donors."

It's not, however, unprecedented: victors have long invited their former rivals for ice-breaking sessions following bitter contests, though some races (including the battle between George W. Bush and John Kerry in 2004) have ended with only a phone call.

In 2008, Obama met with Sen. John McCain after defeating him in the presidential election. The pair met at Obama's transition headquarters in Chicago and issued a joint statement afterwards saying they hoped to work together on challenges such as the financial crisis, creating a new energy economy and protecting the country's security.

"I think there is a tradition here and I think that it is one of the often overlooked but remarkable things about this democracy, this oldest democracy, is that we have, we consistently have elections and either pass power on to a leader of a new party or - because the voters choose - continue to invest power and authority in the office in the same party or same individual without violence and without the kind of anguish and disruptions that you see in so many other countries around the world and you've seen through out history," White House Press Secretary Jay Carney said on Wednesday.

"And I think it is entirely appropriate - and I know the president feels this way - to continue that tradition," he added.