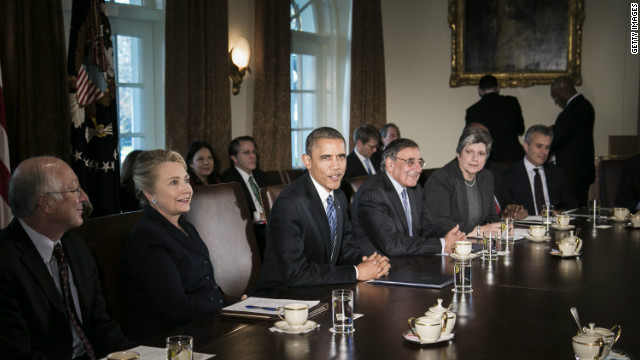 Washington (CNN) - Staff and cabinet reshuffles are one of the many unknowns in Washington as impending departures leave question marks about who will fill the roles of treasury secretary, chief of staff, secretary of state and secretary of defense.

Jack Lew, President Barack Obama's current chief of staff, is the frontrunner for the top position at Treasury, according to senior Democratic sources. The budget expert has a 30-plus year record in government. He formerly served under Obama as director of the Office of Management and Budget, deputy secretary of state for management and resources for Secretary of State Hillary Clinton, and as a special assistant to former President Bill Clinton. He was a longtime aide to former Democratic House Speaker Tip O'Neill.

Inside the White House it is believed he would likely have a smooth Senate confirmation and his budget background would prove especially valuable given the fiscal challenges the country faces. Despite a stint at Citigroup, Lew is regarded by Wall Street as a Washington player, not a market expert, and several top executives said they consider Lew accessible and willing to listen.

Tapping Lew for treasury secretary would leave the chief of staff position vacant.

Deputy National Security Adviser Denis McDonough is on the list of potential chiefs of staff. This is perhaps a surprising name in the mix since his background is in foreign policy and he is relatively young. However, he is well liked by the president. McDonough now serves in the No. 2 position at the White House's National Security Council and has quickly risen through the ranks. He was a senior foreign policy adviser during the 2008 presidential campaign before he headed the communications shop for the NSC at the beginning of the president's first term.

Ron Klain, Vice President Joe Biden's former chief of staff who led the president's debate preparations, is also a contender for the top job, according to senior Democrats. Obama is said to be impressed with his debate prep work during the election and the well connected lawyer is a familiar presence to those inside the current White House. The same sources said if he is not tapped for the chief of staff job, he might be asked to serve in another senior level West Wing position.

Despite the floated names, X factors abound. If current U.S. Ambassador to the United Nations Susan Rice is not nominated for secretary of state, these sources said Obama could nominate her to lead the NSC, replacing current White House National Security Adviser Donilon. In that scenario, Donilon, among the staffers most liked by the president, might be asked to serve as chief of staff. His wife Catherine Russell is chief of staff to the vice president's wife, Jill Biden.

Speculation Rice will be nominated as secretary of state to replace Hillary Clinton is still high, something her recent meetings on Capitol Hill with critics did little to quell. Democratic officials told CNN Rice wanted to visit the Hill to answer questions after the fallout from her appearances on Sunday shows following the attacks in Benghazi.

But Sen. John Kerry of Massachusetts, who has long wanted the job, is still in the mix. The former Democratic presidential nominee and chairman of the Senate foreign relations committee has kept a low profile, a potential sign he's continuing to angle for the top diplomatic position. His name has also been floated as an option to head the defense department when Leon Panetta steps down, even though he is said to not want that job.

Carter has a history of handling budget and business issues, fitting topics at this time.

Hagel, a Republican from Nebraska, is the former deputy administrator of veterans affairs under former President Ronald Reagan, served in the Vietnam War and on the Senate foreign relations committee. A Hagel pick would follow a tradition of nominating bipartisan secretaries of defense, most recently Robert Gates who served under Obama and former President George W. Bush.