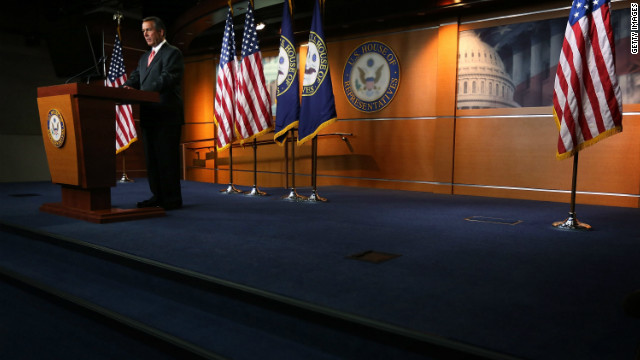 For the first time we're getting a look at what the White House is offering to break the stalemate. Republicans consider it an overreach. Democrats make clear it's a first offer, to get specific on the numbers.

The headlines? The White House is asking for $1.6 trillion dollars in new taxes. This would include the president's campaign pledge to raise tax rates on families who make $250,000 a year and more. It would bring in additional money by closing loopholes, limiting deductions, raising the estate tax rate to 2009 levels and increasing capital gains and dividends taxes.

Republican sources tell CNN the $1.6 trillion figure is higher than any number the White House had previously presented and was so disarming, according to one source, it set the talks back.

Democrats say the GOP is feigning outrage. In September 2011, Obama first proposed raising taxes one and a half trillion dollars - at that time to pay for the so-called Jobs Bill. Republicans dismissed it as a political stunt with no chance of movement.

It would seem the White House is digging in on its position on taxes - or at least making their stance clearer to the Republicans and the public.

Reflecting a new aggressive posture by the Democrats, the proposal laid out by Geithner also called for additional spending, including $50 billion in new stimulus spending next year, a home mortgage refinancing plan, an extension of unemployment insurance and an extension of the payroll tax cut. It includes a permanent mechanism to vote on a debt limit increase, which would avoid the kind of crisis the U.S. faced in the summer of 2011.

In return, according to multiple sources, the Obama administration is offering to find $400 billion in new cuts to Medicare and other entitlement programs, with the specifics to be hammered out next year.

While Republicans called these proposals unbalanced and unreasonable, White House aides made clear the president is ready to take a counter offer.

This all amounts to an elaborate negotiating dance. With time running out until tax rates automatically rise and drastic spending cuts kick in - part of the so-called sequester - both sides are playing for leverage against the clock.

Democrats are emboldened by electoral successes and that the president won a second term while pledging to do what the Republicans are still objecting to: raise tax rates for the wealthiest. Democrats believe the Republicans must and will relent on that point.

To that end, CNN learned in a phone call Wednesday night Obama told Boehner there would be no deal unless the GOP agrees to raise tax rates for the wealthiest. That means recently floated alternatives – including closing loopholes or limiting deductions - would not be enough on their own. Rates must go up as well for the top 2% of income earners.

Republicans tried to turn the conversation away from taxes, insisting the real debate should be about spending cuts.

"Despite claims that the president supports a balanced approach, Democrats have yet to get serious about real spending cuts," Boehner told reporters Thursday.

Reflecting a growing sense of pessimism among Republicans, the speaker added, "no substantive progress has been made in the talks between the White House and the House over the lat two weeks."

In a statement that accused Republicans of blocking a deal to protect "the very wealthiest individuals," White House Deputy Press Secretary Josh Earnest responded to the GOP in an email.

"The President has already signed into law over $1 trillion in spending cuts and we remain willing to do tough things to compromise, and it's time for Republicans in Washington to join the chorus of other voices - from the business community to the middle class Americans across the country - who support a balanced approach that asks more from the wealthiest Americans," Earnest said.