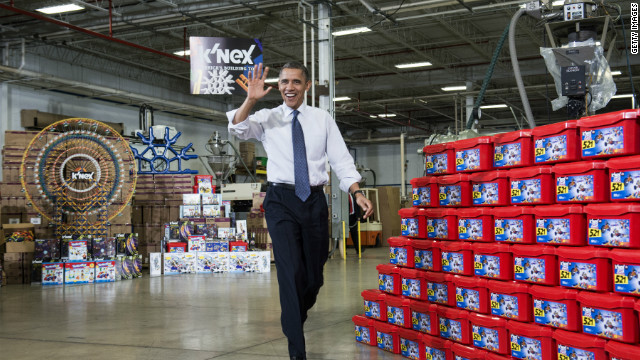 The president traveled to Pennsylvania for a campaign-style event, where he toured a local factory and delivered remarks on the looming fiscal cliff, a series of tax hikes and spending cuts set to kick in at the beginning of the year if Congress and the White House fail to reach a deficit-reduction deal.

"I've been keeping my own naughty and nice list for Washington," the president said after a tour of the The Rodon Group manufacturing facility, which produces more than 95% of the parts for K'NEX Brands toys. "So you should keep your eye on who gets K'NEX this year. There are going to be some members of Congress who get them and some who don't."

The event, intended to mobilize support for the president's proposed solutions to the fiscal cliff, comes as Republicans on Capitol Hill insist that recent negotiations with the White House have been unproductive.

Earlier Friday morning, House Majority Whip Kevin McCarthy released a video featuring a small business in nearby Collegeville, Pennsylvania, whose owner, Jerry Gorski, opposes the tax increases being pushed by Obama and Democrats on Capitol Hill. They propose raising rates on families making more than $250,000 in addition to closing loopholes, limiting deductions and increasing taxes on capital gains and dividends.

Republicans, however, staunchly oppose a raise in tax rates.

But the president remained undeterred in his speech Friday, telling the crowd, "Our long term goal is to get our long term deficit under control in a way that is balanced and is fair. That would be good for businesses, for our economy, for future generations. And I believe both parties can and will work together in the coming weeks to get that done."

In recent days Republicans have expressed dismay over the $1.6 trillion in revenue the president has put forward as part of a possible agreement - a higher amount they say they expected.

While Obama did not mention any specifics Friday, he did hint that the deal would not be easily agreed upon, saying "In Washington nothing is easy so there is going to be some prolonged negotiations. And all of us are going to have to get out of our comfort zones to make that happen."

And just in case those attending the event missed the subtle holiday-themed deadline of the fiscal negotiations, the president was happy to remind them, saying "If Congress does nothing, every family in America will see their income taxes automatically go up on January first…That's a Scrooge Christmas."