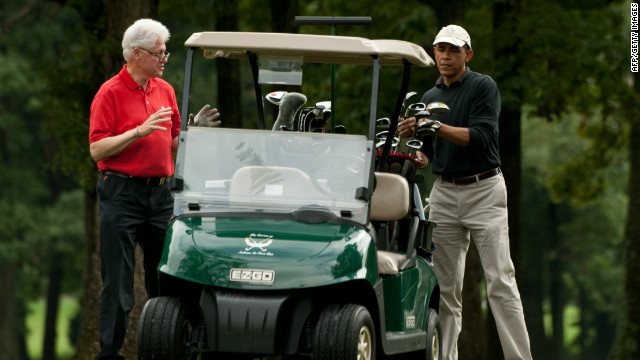 Washington (CNN) – On a brisk Sunday in Washington, President Barack Obama took a short trip to Joint Base Andrews to play golf with big names in the Democratic Party - former President Bill Clinton and Clinton's longtime aide and candidate for governor in Virginia Terry McAuliffe, as well as U.S. Trade Representative Ron Kirk.

Clinton and Obama have a history of golfing with one another. In September of 2011, a golf outing by the former and current presidents fostered the tight relationship that was featured throughout the 2012 campaign.

This is the third time since that victory that Obama, an avid golfer, has hit the links.

McAuliffe announced in early November that he would make his second run for Virginia governor in 2013. "I want to be straightforward with you: I plan on running for Governor of Virginia in 2013," McAuliffe wrote in an email to supporters.

The longtime aide to Bill and Hillary Clinton made his first run for the Virginia governor's house in 2009. He finished in second place during the Democratic Primary to state Sen. Creigh Deeds, a candidate who went on to lose to current Virginia Gov. Bob McConell by a landslide.

Kirk was the former Dallas mayor and a vocal supporter of Obama during the 2008 and 2012 campaigns.