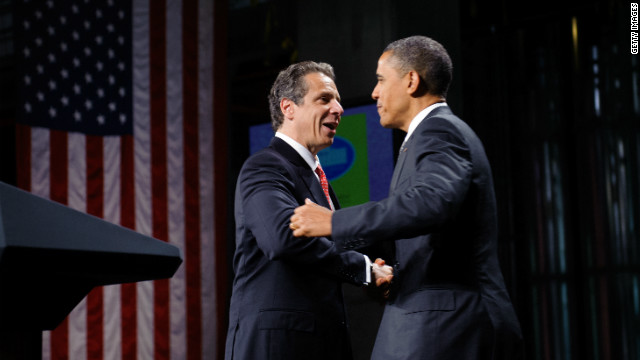 Washington (CNN) - Monday's meetings in Washington left Gov. Andrew Cuomo of New York "optimistic" that lawmakers, currently sharply divided over a deal to avert massive spending cuts and tax hikes, will come together to approve billions to aid the recovery from Sandy, the superstorm which hit over a month ago.

Standing with members of his delegation after meeting with leaders on Capitol Hill and at the White House, Cuomo said House Speaker John Boehner "wants to be supportive" and said their discussion did not delve into some details, such as whether Republicans would require an emergency appropriations measure to include spending offsets from other pockets in the budget.

Cuomo, a Democrat, said Boehner expects a measure to be moving through Washington "by the end of the year, possibly by Christmas. And beyond that we didn't get into any specifics."

"I heard the speaker to say that he is waiting for the White House to send over a proposal, a piece of legislation," he said. "They will then obviously do what they have to do on the House side and work with the Appropriations Committee."

New Jersey Gov. Chris Christie will visit Washington on Thursday, Cuomo said. The two have professed a united front in dealing with the aftermath of the storm, which left damage estimated in billions. Both Cuomo and Christie are speculated to be potential 2016 presidential contenders.

Rep. Peter King, R-New York, said Boehner "wants to move it as quickly as possible" and "make it work."

Cuomo earned high praise for his handling of the storm: a poll released Monday showed 67% of voters in New York rated his work as "excellent or good." Christie's approval rating has similarly seen a post-storm boost.

Among those he met with at the White House was Chief of Staff Jack Lew.