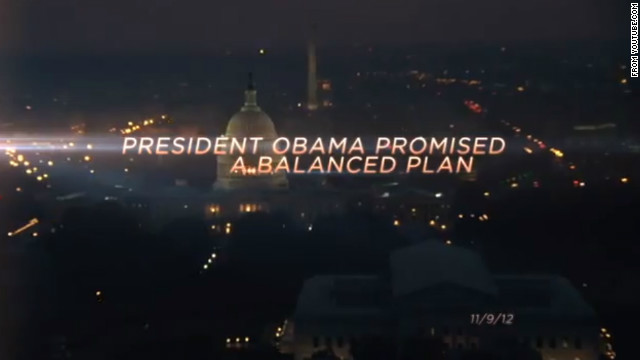 First on CNN: Republican advocacy group to step up efforts to pressure Obama

Washington (CNN) - In the first advertising effort to support the Republicans in the ongoing fiscal cliff debate, the advocacy group Crossroads GPS will go on television Thursday trying to push the White House to offer more spending cuts as part of any deal. The group is buying $500,000 worth of time on national cable, including on CNN, as well on stations in the Washington area during the Sunday public affairs programs.

The group, part of the American Crossroads groups founded by Karl Rove, promises this is a "first step in a larger effort."

The commercial begins with President Barack Obama saying: "If we are serious about reducing the deficit we have to combine spending cuts with revenue." Then the narrator says: "so far a huge tax increase is his solution. No real spending reforms. Instead more taxes."

The ad continues: "The time for politics has ended. We need bipartisan ideas we can all support. Call President Obama and tell him it's time to show us a balanced plan because every day wasted is another $4 billion we are deeper in debt."

The offer conveyed by the White House to congressional leaders last week included $1.6 trillion in revenue over 10 years, mostly from letting tax rates on the wealthiest Americans go up. It also proposes up to $400 billion in health care savings and $200 billion in other spending cuts.

"President Obama's idea of a balanced plan is that we pay more and government gets to spend more. The White House has yet to propose significant spending cuts to go along with its massive proposed tax hikes. Serious revenue concessions have been made, but Obama won't take yet for an answer," Steve Law, Crossroads' GPS CEO, said in a statement.

Democrats have also weighed in with a coalition of labor groups last month airing an ad saying any deal should not include major cuts in entitlement programs, and organizers from Obama's campaign have been urging followers to push Congress to pass legislation already approved by the Senate to extend tax cuts for families making less than $250,000 a year.