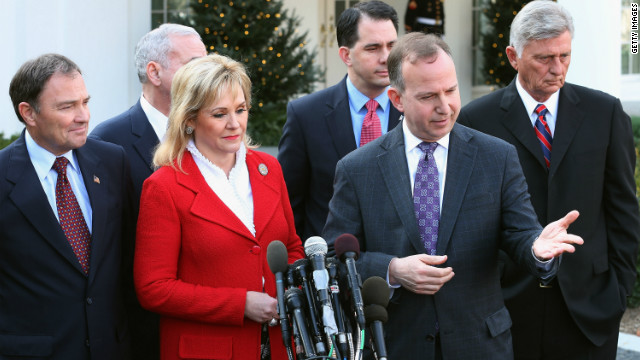 Speaking outside the White House, the group of three Democratic and three Republican governors characterized the meeting as "positive" while pushing the White House to come to an agreement with Congressional Republicans as their own states' well-being hang in the balance of the contentious negotiations.

"We came, in part, to make sure the voices and the issues that we face as governors in the states are heard and are considered as part of the discussions here in Washington," said Jack Markell, chairman of the National Governors Association and governor of Delaware. He was flanked by Democratic Govs. Mark Dayton of Minnesota and Mike Beebe of Arkansas, in addition to Republican Govs. Gary Herbert of Utah, Scott Walker of Wisconsin and Mary Fallin of Oklahoma.

"There's an impact here not just on the fiscal issues but how the actions here will actually impact the economy back home as well," Markell said. "We agreed today we would focus on what we have in common, which frankly is a lot."

Washington, meanwhile, is at a standstill on budget negotiations. While Republicans have proposed cuts to spending and reforming the tax code to tame the nation's growing debt, Democrats and Obama's administration are advocating for allowing the Bush-era tax rates to increase on the top two percent of income earners in order to generate revenue.

The governors demurred when asked which side's plan they would endorse.

"You got to come together and get this done," Herbert said. "This impacts the economy, the uncertainty out there is creating havoc with the economy in our states."

The governors also said there was a discussion pushing for more flexibility in implementing federally mandated programs.

Upon Obama's re-election and as governors devise their budgets, states are tasked with either managing their own affordable insurance exchanges, subsidizing insurance for lower-income consumers, or allowing the federal government to manage the exchange for them as a part of the Affordable Care Act.

While Obama's re-election marked the continued implementation of the administration's 2010 health care initiative, Boehner has said that he sees portions of the Affordable Care Act up for bargaining as a part of the dealings to avoid the automatic spending cuts and tax hikes set to go into effect at the beginning of next year.