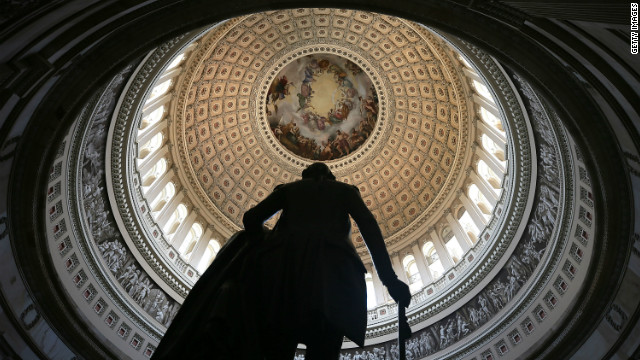 A Washington Post/Pew Research Center survey released Tuesday morning also indicates 49% of Americans predict the president and Republicans in Congress will not reach an agreement to prevent the automatic spending cuts and tax increases that would kick in at the end of the year, with four in ten saying a deal will be reached.

Last year Congress and President Barack Obama agreed to a program to reduce the federal deficit that some people refer to as the "fiscal cliff." Unless Congress and the President reach an agreement before January 1, tax rates will automatically rise next year for nearly all Americans and major spending cuts will automatically begin to kick in for most government spending programs, including military programs.

If there's no deal, according to the poll, by a 53%-27% margin people say Congressional Republicans will be more at blame than Obama, with 12% saying both sides should be equally blamed. Among independent voters, 52% would blame Republicans and 21% would point fingers at the president.

A CNN/ORC International survey released last week indicated more Americans would blame the GOP in Congress (45%) rather than Obama (34%) if the fiscal cliff provisions actually go into effect next year.

Fifty-seven percent of those questioned in the Washington Post/Pew Research Center poll say they understand “very well or fairly well” what would happen in January if the automatic spending cuts and tax increases go into effect. Nearly two-thirds say such spending cuts and tax increases would have a major effect on the country's economy, and 84% say those effects would be mostly negative.

Forty-three percent say if the country falls off the fiscal cliff, it would have a major impact on their personal financial situation, with 35% saying there would just be a minor effect.

The Washington Post/Pew Research Center poll was conducted November 29-December 2, with 1,003 adults nationwide questioned by telephone. The survey's overall sampling error is plus or minus 3.5 percentage points.