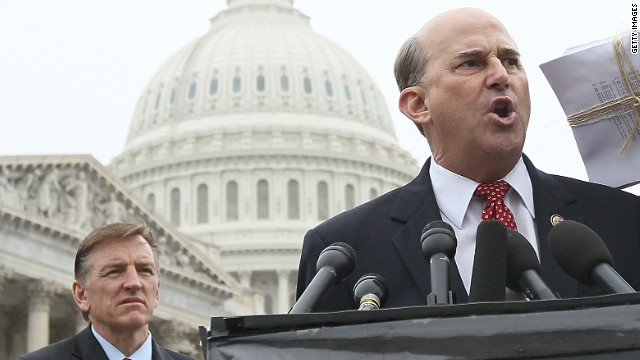 Three hundred ninety-eight congressmen voted in favor of passing the bill. Thirty two did not vote and one, Rep. Louie Gohmert, a Republican from Texas, voted against the measure, which passed the Senate in May with no opposition.

The House voted on the bill, aimed at modernizing language referring to the mentally ill, Wednesday morning, just as Congress was leaving for a long weekend and ahead of the looming "fiscal cliff."

"I don't have a problem with lunatic being used in the federal law and apparently I was the only one on the floor here that didn't have a problem using the term lunatic," Gohmert said, in a speech on the House floor criticizing the Obama administration’s budget proposal.

"In fact, in occurred to me, that not only should we not use the term lunatic at a time when we are facing national bankruptcy if we don't get serious about our issues but we should also use the term to identify those who want to continue doing business as usual around this town."

Lawmakers and the public's frustration boils as Washington's continues to show its inability to reach common ground to avoid the fiscal cliff - a series of tax hikes and spending cuts set to go into effect at the beginning of the year if a deal is not struck between the opposing demands of the White House and congressional Republicans.

Gohmert chided President Barack Obama's administration for their opposition to extending the Bush-era tax cuts for the top 2% of earners. Democrats paint the Republicans as holding middle-class incomes hostage for maintaining the Bush-era rates be extended for income of all levels. For their part, Republicans argue for closing loopholes and tax deductions to generate revenue to tame the nation's growing debt as well as reform for the tax code and entitlement programs.

Gohmert reiterated the GOP sentiment, saying wealthy people like Warren Buffett can still use the loopholes and deductions while the middle-income earners cannot.

"That's why we shouldn't eliminate the word lunatic. It really has application around this town," he said.