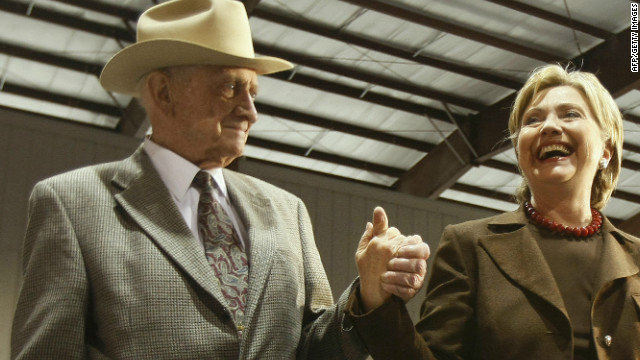 US Senator and Democratic presidential candidate Hillary Clinton is escorted onto the stage by former Congressman Jack Brooks (L) at a campaign rally at the airport hangar in Beaumont, Texas on March 3, 2008. AFP PHOTO / ROBYN BECK
December 5th, 2012
08:12 AM ET

At 89, Brooks passed away two weeks shy of his 90th birthday.

Brooks was elected to Congress as a Democrat in 1952, and remained in the House for 42 years, one of the longest tenures on Capitol Hill. He lost re-election in 1994.

In 1979, the longtime congressman became the dean of the Texas congressional delegation and became the most senior member in Congress, according to biographical information listed on Lamar University's website. Brooks was a strong supporter of the school, located in Beaumont.

He rode in the Dallas motorcade when President John F. Kennedy was assassinated in 1963. He was also present on Air Force One when then-Vice President Lyndon B. Johnson, a Texas native, was sworn-in as president.

A tough advocate for civil rights legislation, Brooks helped write the Civil Rights Act of 1964 and the Voting Rights Act of 1965. During the impeachment of President Richard Nixon, he played a key role on the House Judiciary Committee, according to the Briscoe Center for American History at the University of Texas.

Born in Louisiana, Brooks moved to southeast Texas town of Beaumont in 1927 and later graduated from the University of Texas at Austin in 1947. He enlisted in the U.S. Marine Corps in 1942 and served overseas for nearly two years in the Pacific and in North China. He was discharged as a first lieutenant in 1946.

After finishing law school at the University of Texas, Brooks was elected to the state's House of Representatives in 1946.