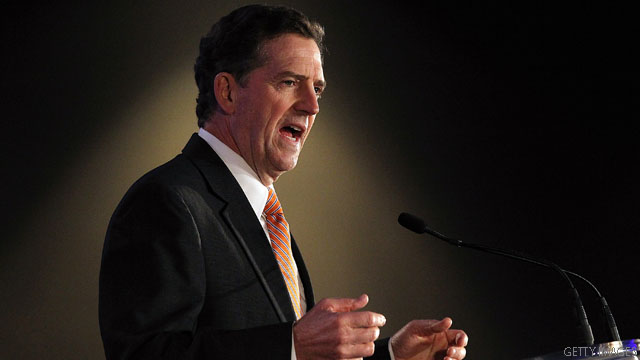 RESIGNING: TEA PARTY FAVORITE SEN. JIM DEMINT LEAVES SENATE FOR CONSERVATIVE THINK TANK… DeMint, in an interview with CNN’s Wolf Blitzer, says there is “there's no question” that he will have more influence from outside the Senate: “After this last election it's apparent we need to do more as conservatives to convince Americans that our ideas and policies are going to make their lives better. The Heritage Foundation is the premier think tank, research organization, the premier idea group for the conservative movement. This will give me the opportunity to help take our case to the American people and to translate our policies into real ideas.”

Gut Check Full Service… CNN’s Paul Steinhauser breaks down how DeMint’s departure shakes up the 2014 battle for the U.S. Senate: “DeMint’s departure means there will now be 34 Senate seats up for grabs in the 2014 midterms with the Democrats defending 20 of those seats and the GOP defending 14. Also, South Carolina will be a busy place in 2014, as Palmetto State voters will cast ballots for two Senate seats (the DeMint special election and senior Sen. Lindsey Graham’s re-election in ’14) and governor.”

ESTABLISHMENT REACTS: A GOP establishment source tells CNN’s Dana Bash that DeMint “follows the trail blazed by Sarah Palin: leave in the middle of the term to make a lot of money.” #Ouch

RUBIO ROARS: “Sen. DeMint is one of the main reasons why I’m in the U.S. Senate. When I ran for the U.S. Senate two and a half years ago, no one thought I had a chance to win. Jim DeMint was the first person in Washington that believed in me and invested in me, and I’m eternally grateful.”

TRAIL TRIVIA
(Answer below)
What four states ratified the 13th Amendment – the amendment that abolished slavery – after first rejecting it?

For us, and we suspect many of you, campaigns do not end abruptly on Election Day.

Sure, the campaigning ends, the television ads disappear, and we have a winner and a loser. But then comes the time of examination, evaluation and dissection of every aspect of the presidential campaign – from field to political, messaging to fundraising. Only recently, have we begun to look at the campaigns digital efforts – which has quickly proven to be one of the most effective ways to raise money, recruit supporters and organize volunteers.

We allowed Moffatt and Bleeker a chance to ask each other a direct question about the campaign, something that they might have wondered what the other one was doing in the heat of the political battle and here is an edited part of that answer we found fascinating:

Q. BLEEKER: What were your goals from a Facebook perspective? We were really actually wondering on the campaign, “Are they investing in non-battleground states? Why?”

A. MOFFAT: Some of the things you saw in our non-target states was very fundraising or list building specific … We also felt, looking at the metrics, the low-hanging fruit was still there. We also never really got to a point where we thought, we have to stop national advertising, because there are still people to be brought in. … I think that as we were looking at the vanity metrics as well, it was kind of funny the things that people fixated on again and again, and that’s why talking about this became such an easy number for us, because we were saying the same number of people were engaging online, despite the fact that at the end they were three times larger than us.

Q. MOFFAT: A lot of what we thought, when we looked at [your] advertising buys … was with more of an eye to earned media than it was sometimes to efficiency. When you did state takeovers, like in the Cleveland, Plain Dealer … the day of the early voting … I saw you guys driving more reporters to talk about it because it was a national buy. You know, you’re buying a set of geo-location, because everything we hear about team Obama it’s like geo-location. And if it doesn’t matter in the state, it doesn’t matter. And then they would go out there and thump their chest and say, you know, “You can see it.” Were you actually seeing the results across the board?

A. BLEEKER: No question, when we bought the Des Moines Register on Iowa primary day, and the [New Hampshire] Union Leader that was definitely for the media. [The media] all covered the … Iowa thing like that was really smart. And I think we got more play on that [and] frankly donations from it because everyone went to the site to click from it than I’ve ever seen from any other kind of our media buys. But I do think that stuff was sort of throw away. It was cheap. … The early vote stuff couldn’t have been more essential to our campaign. We knew we were winning the campaign pre-election day. You know, when all of the sudden we can look at the folks who voted early and that starts to line up with our turn out models, we felt pretty good. So we spent a large portion of our actual budget on what I call field support and mobilization and much of it was driving to some metric. The takeovers did do that.

And as we closed the forum with a roundtable of next-gen political reporters, CNN.com Managing Editor Meredith Artley, @MeredithA asked each of these stand out journalists to sum up the 2012 campaign in one tweet:

Scott Conroy (@RealClearScott)
Everyone was wrong about everything.

Leading CNNPolitics: Fiscal cliff deal down to wrangling over details
Both sides agree the wealthy will pay more, so now fiscal cliff talks come down to how much Republicans can wring out of the White House in return for giving in on taxes. To President Barack Obama, it's all about first locking in additional revenue from raising taxes on high-income owners, an outcome the GOP has long rejected. Republicans led by House Speaker John Boehner want to secure commitments on entitlement reforms and spending cuts opposed by Democrats as part of a broader agreement to reduce the nation's chronic federal deficits and debt. – Tom Cohen

Leading Drudge: Christmas Tree Banned: 'Religious Symbol'
Residents in a Newhall senior apartment complex are protesting an order from management to remove their beloved Christmas tree from the community room because, they were told, it's a religious symbol. On Tuesday, Tarzana-based JB Partners Group Inc. sent a memo to staff at The Willows senior apartment building demanding they take down Christmas trees and menorahs in communal areas. – Mariecar Mendoza

Leading HuffPo: 'Ridiculous'
Republican Wisconsin Gov. Scott Walker is backing away from his support for eliminating same-day voter registration, saying it is a distraction while he is trying to focus on job creation. "This is a ridiculous issue. My priority is about jobs, creating jobs," he told reporters on Wednesday after a ceremony to promote a Wisconsin National Guard officer. – Amanda Terkel

Leading The New York Times: Boehner Gains Strong Backing From House Republicans
With a daunting fiscal crisis looming and conservatives outside the House torching him at every turn, Speaker John A. Boehner might be assumed to have a shaky hold on his gavel. Instead, it appears he is enjoying the broadest support of his tumultuous two-year speakership from House Republicans. – Jennifer Steinhauer

- Romney strategist: It wasn’t Christie; it could’ve been Sandy -
STUART STEVENS, SENIOR ROMNEY STRATEGIST, IN AN INTERVIEW WITH PBS’ CHARLIE ROSE…
ROSE: But when did you think you were going to lose?
STEVENS: We’re always very realistic about it contrary to some reports. And we thought that we had a good chance to win. After the storm, I never had a good feeling.
ROSE: Really.
STEVENS: Not that the storm impacted things that much per se but these races, a race like this is a lot like an NBA game and it’s all about ball control at the end. And we went from - in every incumbent I’ve ever defeated - I’ve been involved in, well you had to really prosecute an argument at the end. And we went from having these big rallies around the country to literally sitting in hotel rooms and there’s just nothing we could do about it. I don’t think at all that it had anything to do with Chris Christie. I think it was just that now -
ROSE: You saw the president being presidential.
STEVENS: And - and the conversation was about the storm.
ROSE: Yes.
STEVENS: It was not about what we were talking about.

- Clinton lends vocal support to Susan Rice -
SECRETARY OF STATE HILLARY CLINTON RESPONDS TO A QUESTION FROM CNN’S JILL DOUGHERTY: “Susan Rice has done a great job as our U.N. ambassador. She has been a stalwart colleague in a lot of the tough decisions that we’ve had to make, and certainly with respect to defending our national interests and national security at the United Nations. And she’s played an important role in what we’ve been able to accomplish in the last four years. I worked very closely with her in shaping the sanctions on North Korea and Iran, and she has been on the go for us in every way that was required.”

- Dole’s untriumphant return: U.N. convention for disabilities fails–
HOUSE MINORITY LEADER NANCY PELOSI AT A CAPITOL HILL PRESS CONFERENCE: “For Sen. Dole to come as a former leader of the Republicans in the Congress, to personally come to the Senate floor to lobby, to advocate for that legislation - it just needed five more votes – and to see the Republicans in the Senate to reject that out of hand for reasons that go beyond reason, it was stunning. … For them to slap the face of our veterans, people with disabilities, families with children with disabilities … That was one of the saddest days. So anyone who was a party to that – well, I wish them well wherever they are going. I hope that we can have more of our values represented there.

The 13th Amendment outlawed slavery in the United States and was adopted on December 6, 1865, when Georgia – a former Confederate state – adopted the amendment.

Though ratified by an overwhelming majority of states on the first try, the 13th Amendment was first rejected by four states in 1865: New Jersey, Delaware, Kentucky and Mississippi.

Each state eventually changed its mind; New Jersey was the fastest - it did so on January 23, 1866. Mississippi, on the other hand, waited until March 16, 1995, (you’ve read that right, 1995) to ratify the 13th Amendment. This does not mean, though, that the amendment was not enforced in the state. Because enough states had ratified before December 6, 1865, the amendment was the law of the United States at that point.

Congratulations to Greg Dean (@gregdean11), who not only answered the question but also tweeted that Mississippi did not ratify until 1995.

GOT NEWS?
Our inbox awaits: gutcheck@cnn.com
Anyone can sign up for Gut Check by emailing gutcheck@cnn.com
Tips or comments? Send them to Michelle; send complaints to Preston, because he is already in a bad mood. We also want to give a shout out to Dan Merica, who runs our Twitter account @gutCheckCNN and enriches this product every single day. And a special shout out to Thomas Hanson for his great work on Gut Check today.