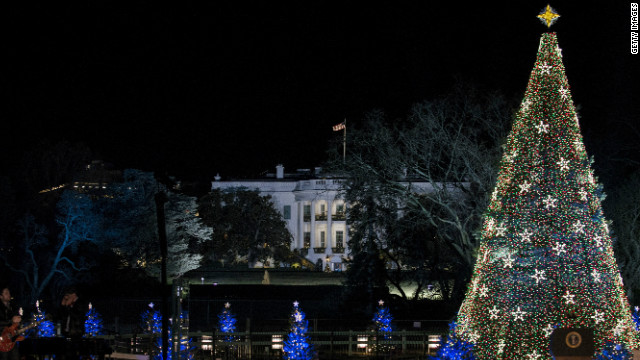 The National Christmas Tree at the White House was lit this past week.
December 8th, 2012
04:36 PM ET

White House adds another social networking site to its cache

(CNN) - Pin it up under home decor, food, or even pets: The White House is now on Pinterest.

"Whitehouse44" is the latest user of the social networking site, which lets users post and categorize their favorite recipes, outfits, photographs, memes and do-it-yourself projects.

But what might the "pinner-in-chief" put on his boards?

"On Pinterest, the White House will share pins and boards that range from inspiring images and quotes to infographics that help explain key issues to details about the life inside the White House," Schulman wrote.

What to expect first, she suggested, are photos and craft ideas from a seasonally-decked White House. The first family will play host to some 90,000 visitors this holiday season and has trimmed no less than 54 trees.

President Barack Obama's campaign maintained a Pinterest profile, which had nearly 37,000 followers and 239 pins as of Saturday. Among the categories were "Obama 2012 in action," "The First Family," and "Dear Mitt Romney."

Ann Romney set up a Pinterest profile, as well, during her husband's bid for the presidency.