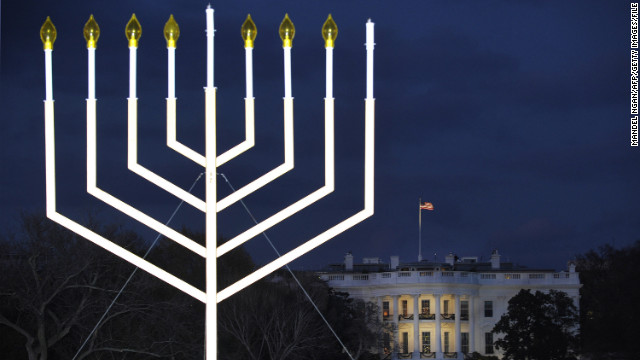 Lighting of national menorah marks the beginning of Hanukkah

Washington (CNN) - For more than 20 years, Rabbi Levi Shemtov, the executive vice president of the American Friends of Lubavitch, has presided over the annual event kicking-off Hanukkah in the nation’s capital: the lighting of the National Menorah.

The event has become a tradition, going back to 1979 when President Jimmy Carter was still in office.

But it was President Ronald Reagan who officially designated the seven-branched candelabrum, placed in the Ellipse just south of the White House, the “national menorah.”

Reflecting on his most memorable moment attending the menorah lighting, Shemtov –- dressed in the prescribed black hat and sporting the long beard associated with his movement of Orthodox Jews -— said, “I was up there  [on the stage] on a windy day and my hat blew off, and everyone cheered," even though it was at his expense, he reminisced. The moment, he says, lives on the Internet.

Just adjacent to the White House Christmas tree, the 30-foot menorah stands high enough to be seen from afar, and its height is regulated under Jewish law.

“It’s got to be visible, so it has to be at least two and a half feet off the ground minimum, and not higher than 30 feet, because the rabbinical authorities deem that to be the height at which a person has to crane their neck to see it,” Shemtov said.

The whole idea of Hanukkah, he said, is visibility.  The Chabad group of Orthodox Jews who organize the event say that for the thousands of people who watch the broadcast of the illumination of the menorah, it is a signal that the 8-day religious holiday has begun.

Observation of the holiday begins at sunset, and this year’s event began at 4:00 p.m. ET to the sounds of the United States Navy Band and "The Three Cantors."

This year, Jeffrey Zients, director of the Office of Management and Budget, was among the guests of honor to help light the first candle. Jack Lew, the current White House Chief of Staff, has done it twice in years past.

The ceremony was followed, of course, by distribution of fried potato latkes and jelly donuts.