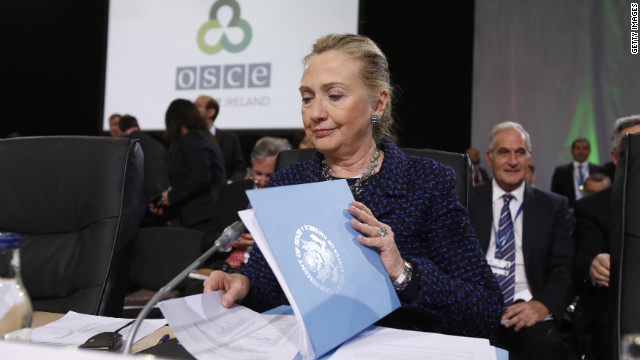 A slew of new polls give Clinton high marks

Washington (CNN) - It's been just five weeks since the 2012 presidential election, but it seems it's never too early to talk about a potential 2016 White House bid by outgoing Secretary of State Hillary Clinton.

A new poll released Wednesday is the fourth survey over the past week to indicate positive numbers for the former, and possibly future, presidential candidate.

The findings of the Bloomberg survey are similar to results from national polls from Politico/George Washington University earlier this week and from ABC News/Washington Post last week, as well as from a Siena College Research Institute survey out last week of New York State voters.

While Clinton's numbers seem impressive, there's a good chance they would drop if she changed her mind and decided to return to campaign politics.

"One reason why Hillary Clinton's ratings are high may be that she is not running for office and holds a position that many Americans view as non-partisan. If she becomes an active candidate again, it would not be surprising to see her numbers decline," said CNN Polling Director Keating Holland. "We saw this before with her. When she was first lady, her favorable ratings were often in the high 60's, but they dropped below 50% as soon as serious talk started of her running for the U.S. Senate from New York."

Clinton has repeatedly said that she intends to retire to private life once whomever President Barack Obama names as her successor as secretary of state is confirmed by the Senate, and she's added that another run for the White House is not in the cards for her.

"Look, I'm flattered. I am honored," she told CNN's Wolf Blitzer, in an interview in April, about calls by other Democrats for her to consider another run in 2016. "That is not in the future for me, but obviously I'm hoping that I'll get to cast my vote for a woman running for president of our country."

The former first lady served eight years as a U.S. senator from New York. Four years ago she lost an epic Democratic presidential nomination battle to then-Sen. Barack Obama of Illinois. Obama nominated Clinton as his secretary of state after winning the 2008 general election.

The Bloomberg National Poll was conducted December 7-10, with 1,000 adults nationwide questioned by telephone. The survey's overall sampling error is plus or minus 3.1 percentage points.