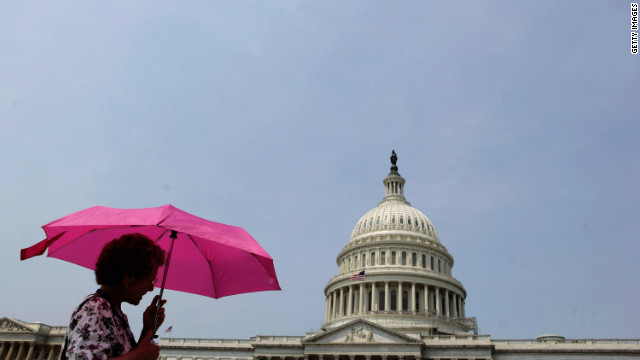 DEVELOPING: CENSUS BUREAU PROJECTS AN OLDER COUNTRY WITHOUT RACIAL MAJORITY IN THE NEXT 50 YEARS… “The U.S. will become a plurality nation, where the non-Hispanic white population remains the largest single group, but no group is in the majority,’ said Acting Director Thomas L. Mesenbourg. … According to the projections, the population age 65 and older is expected to more than double between 2012 and 2060, from 43.1 million to 92.0 million. The older population would represent just over one in five U.S. residents by the end of the period, up from one in seven today. The increase in the number of the ‘oldest old’ would be even more dramatic — those 85 and older are projected to more than triple from 5.9 million to 18.2 million, reaching 4.3 percent of the total population.”

TRAIL TRIVIA
(Answer below)
What religion, when compared to the total number of Americans, is the most overrepresented in the 113th Congress?

We have a secret fondness for retirement speeches. Perhaps it’s because they often fall after bitter campaigns. Or perhaps it’s that they traditionally come in the heart of the holiday season, when we have the mindset to retreat from the daily political squabbling.

It is also in part because of the honesty and aspirations of people who have chosen public service as a profession, showing a little of their hopes for our country … instead of wallowing in the context of a fight.

One such speech caught our eye today. Not from the oft-covered lawmakers who are departing such as Sens. Joe Lieberman (I-Connecticut) or Scott Brown (R-Massachusetts), rather a soft-spoken history maker who is anything but a household name: Sen. Daniel Akaka (D-Hawaii).

Akaka, a World War II veteran and former public school teacher broke history as the first senator of Native Hawaiian descent when he was first appointed in 1990. Today, he took to the Senate floor to tell 49 states what they could learn from his homeland: “Hawaii has so much, I believe, to teach the world and this institution, and Congress and in our nation. We are truly all together in the same canoe. If we paddle together in unison we can travel great distances. If the two sides of the canoe paddle in opposite directions, we will go in circles.”

A nice parting shot at the fiscal cliff…

Leading CNNPolitics: Behind the scenes, fiscal cliff negations have picked up
House Speaker John Boehner and President Barack Obama spoke on the phone Tuesday evening after House Republican leaders sent a new offer on a deal to avoid the fiscal cliff on Tuesday. "We sent the White House a counter-offer that would achieve tax and entitlement reform to solve our looming debt crisis and create more American jobs," Michael Steel, spokesman for House Speaker Boehner, told CNN. – Deirdre Walsh

Leading Drudge: Obama predicts GOP will cave on taxes
As the clock ticks toward a tax hike on all Americans in 20 days, President Obama predicted Republicans would join Democrats to extend current rates for 98 percent of earners before the end of the year. “I'm pretty confident that Republicans would not hold middle class taxes hostage to trying to protect tax cuts for high-income individuals,” Obama said today in an exclusive interview with ABC News' Barbara Walters. – Devin Dwyer with ABC News

Leading HuffPo: Not Impressed
Voters are not impressed by House Speaker John Boehner's handling of "fiscal cliff" negotiations, according to a new Washington Post-ABC News poll. Just 25 percent of voters approve of the Ohio Republican's handling of budget negotiations, compared with 49 percent who approve of President Barack Obama's. And while Obama gets 79 percent approval from Democratic voters, Boehner garners only 39 percent approval from Republicans. He gets lower marks from moderates than from "very conservative" Republicans. – Arthur Delaney

Leading Politico: Fiscal cliff talks may go past Christmas
Congressional leaders warned lawmakers Wednesday to hunker down for Christmas in Washington, as the fiscal cliff negotiations basically stuck in neutral ahead of a fast-approaching Dec. 31 deadline. The warning followed a phone call Tuesday night between President Barack Obama and House Speaker John Boehner that was described as tense by sources familiar with the call. – Jake Sherman and Manu Raju

Leading The New York Times: As Fiscal Talks Heat Up, Questions on Whether Boehner Can Get the Votes
With negotiations quickening on Tuesday to prevent a year-end fiscal crisis, White House officials once again are confronting a vexing question: Can Speaker John A. Boehner deliver enough Republican votes for whatever deficit-reduction plan he and President Obama might decide? Eighteen months ago the White House was forced to answer in the negative after secret negotiations between the two leaders collapsed once word leaked of their tentative deal, with its proposed revenue increases. But once again, Mr. Obama must put his fate in Mr. Boehner’s hands on the issue that will help define the president’s second term, and his legacy. – Jackie Calmes and Jonathan Weisman

- Boehner: President not keeping his promise -
SPEAKER OF THE HOUSE JOHN BOEHNER AFTER THE REPUBLICAN CONFERENCE MEETING ON CAPITOL HILL: “His (the President’s) plan does not fulfill his promise to bring a balanced approach to solving this problem it's mainly tax hikes and his plan does not begin to solve our debt crisis. … The longer the White House slow walks this discussion, the closer our economy gets to the Fiscal Cliff and the more American jobs are placed in jeopardy.”

- Issa: Pain is required and an American knows that -
REPUBLICAN REP. DARRELL ISSA OF CALIFORNIA IN AN INTERVIEW ON CAPITOL HILL: “If Americans think we're going to get out of a trillion dollar deficit without any pain to them then they have to ask, are they Americans? The truth is – all of us have to be in it together.”

- Waiting -
HOUSE MINORITY LEADER NANCY PELOSI IN A SPEECH ON THE HOUSE FLOOR: “What are we waiting for? What other information? Is there a dove that's going to fly in with a message tied to his leg? What is it that they are waiting to find out before they can make a decision.”

- Senators say farewell, give unvarnished advice on bipartisanship -
REPUBLICAN SEN. SCOTT BROWN OF MASSACHUSETTS ON THE SENATE FLOOR: “I challenge the leadership on both sides of the aisle to make the process more open and transparent. I challenge members to work with each other in a more open and honest manner. And I challenge the president and the Congressional leadership to also work together immediately to address the concerns and needs of our country, because after all, we are Americans first and our country deserves better.”
INDEPENDENT SEN. JOE LIEBERMAN OF CONNECTICUT ON THE SENATE FLOOR: “What is required now is to solve the urgent problems we still have and what is really required to do that is leadership. Leadership of the kind that is never easy or common but Americans know we can summon in times of need because we have summoned it before. Today, I regret to say as I leave the Senate, is that the greatest obstacle that I see standing between us and the brighter American future we all want is right here in Washington. It is the partisan polarization of our politics.”
REPUBLICAN SEN. DICK LUGAR OF INDIANA ON THE SENATE FLOOR: “At its best, the Senate is one of the founders' most important creations. A great deal has been written recently about political discord in the United States, with some commentators judging that partisanship is at an all-time high. Having seen quite a few periods in the Congress when political struggles were portrayed in this way, I hesitate to describe our current state as the most partisan ever, but I do believe that as an institution, we have not lived up to the expectations of our constituents to make excellence in governance our top priority.”
DEMOCRAT SEN. KENT CONRAD OF NORTH DAKOTA ON THE SENATE FLOOR: “I hear people being critical, sometimes when they leave here, of this institution – let me say, I am not in their ranks. I leave this institution with enormous respect. The United States Senate is the greatest deliberative body in the world and the vast majority of my colleagues, I sincerely believe, are serious minded and have the best interest of the country at heart. … We have differences, enormous differences about what is the right thing to do. But I have no doubt that most of our colleagues are well intentioned.”
REPUBLICAN SEN. KAY BAILEY HUTCHISON OF TEXAS ON THE SENATE FLOOR: “When I think back of the things that we have been able to accomplish, and it’s not that just because we were women and we were here, but in a deliberative body where you have one hundred people representing 50 very different states, its not that the men are against anything that we have teamed up to do, it is that because of our experiences that we bring to the table, sometimes it wasn’t thought of before.”

Jill Jackson (@jacksonjk)
@SpeakerBoehner on call w/POTUS:"Spoke honestly and openly about the difference we face..$1.4 in revenue can't pass the House or Senate.

Marco Rubio (@marcorubio)
#Esquire report on having less hair than I once did is sadly true.But good news is I am still in upper 2% in Senate. http://soc.li/8aubTIS

Adam P. Levy (@adamplevycnn)
Jenna Bush is pregnant- Pres. & Mrs. Bush congratulate her on air. Next call is to @ChelseaClinton from her parents – no pressure I'm sure.

The 113th Congress is full of religious firsts – the first Buddhist representative, the first Hindu to serve in the House and the first member who describes herself as a religious “none.”

But even with this diversity, some religions are markedly overrepresented in Congress.

The most overrepresented religion is Judaism. While 2% of American adults identify as Jewish, according to the Pew Forum on Religion and Public Life, 32 members of Congress – or 6% of the legislative branch – is Jewish.

The group that remains most underrepresented is the religiously unaffiliated. While 20% of American adults, according to Pew, fall into that group, only one member of Congress – Democratic congressman elect Kyrsten Sinema of Arizona – identifies as a “none.” That is .2% of Congress.

Two days in a row, no correct answers. Come on people!