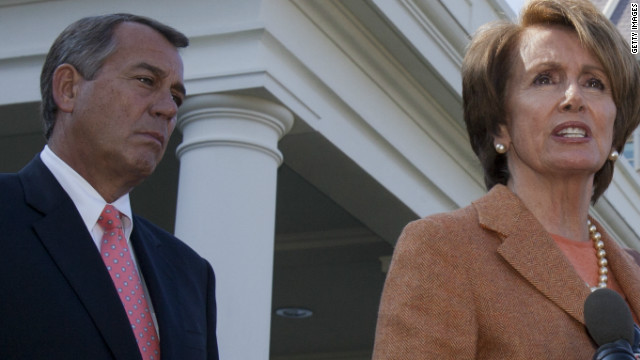 Former speaker to current speaker: 'Figure it out'

Washington (CNN) - House Democratic Leader Nancy Pelosi, who handed over the House speaker's gavel to Republican John Boehner two years ago, suggested he follow her lead when faced with intra-party division and "figure it out."

Asked whether Boehner should be willing to put his speakership on the line to get a deal to avoid the fiscal cliff, Pelosi told reporters on Capitol Hill, "That's what we all take the job to do - to risk it for something, not to just sit in the office."

Pelosi recounted the challenge she faced shortly after she was elected speaker in 2007 and faced intense pressure from Democratic supporters to move legislation to end the war in Iraq. She credited Democratic opposition to the war as a main factor for her ascension into the post.

Facing a Republican president - George W. Bush - who made it clear he would block any efforts by Congress to force a withdrawal or defund the war, Pelosi said she was forced to come up with a way to get legislation through the House to ensure funding for the troops wasn't cut off.

"It's tough, but you have to do it," Pelosi said, explaining that she devised a strategy to hold multiple votes on Iraq legislation so that those Democrats who opposed the Bush administration's policy could go on the record against it, but the troops fighting in Iraq would still get funding to keep the war effort going.

Alienating some members of your own party comes with the territory as speaker of the House, Pelosi argued, noting the Iraq vote "was very unpopular and I have to tell you I'm not sure I ever recovered among some in the left for that."

"I believe he is a person of good intention," Pelosi said of Boehner, saying she hopes her compliment doesn't get him in trouble with the GOP, adding "he knows his responsibility to the country." The former speaker urged Boehner look to her example to come up with a way to bring up a measure that would ultimately renew the tax cuts for the middle class.

"It's painful, but it's the job he signed up for," Pelosi said.