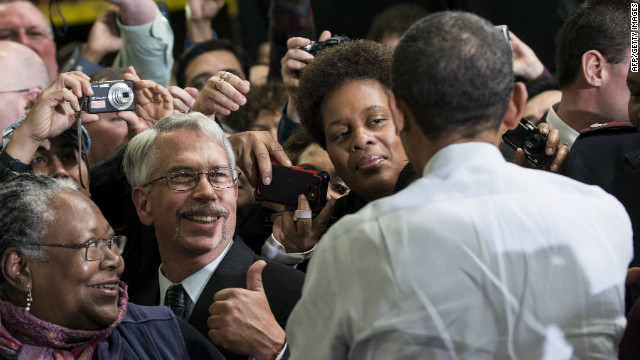 (CNN) – As President Barack Obama and House Speaker John Boehner hash out a deal to avert the fiscal cliff, new polls indicate the president has more support from the American public than his political opponent.

Nearly half of Americans-49%–say they approve of Obama's handling of the negotiations, while a quarter say Boehner is doing a good job, according to a new ABC News/Washington Post poll released Wednesday.

At the same time, 42% say they disapprove of the president's performance, compared to 49% who disapprove of Boehner's role in the talks.

The White House and Congress are in the midst of a pressing, end-of-the year deadline to find a deficit-reduction deal before a large amount of tax increases and spending cuts kick in at the start of next year. The sum could make a significant dent on the economy, with some experts predicting another recession as a result.

Officials familiar with the deal confirmed Tuesday that the two men had spoken over the phone following a new counter-offer proposed by the GOP that same day. The new offer came one day after the White House gave its own new proposal, which included a new revenue number of $1.4 trillion, down from the $1.6 trillion that the Obama administration originally proposed.

The president has adopted a public strategy that includes making campaign-style stops to sell his proposal to the American people. That's in addition to holding meetings with business and labor leaders, a tactical move to build pressure on Congress through the public.

According to the poll, Obama seems to have more support from his own party than Boehner does from the GOP. Eighty percent of Democrats approve of the president, while only 38% feel the same way about Boehner.

Meanwhile, a new Bloomberg National Poll indicates that nearly two-thirds of the public, including nearly 50% of Republicans, think that because Obama recently won re-election, he has a mandate to oversee certain provisions during his second term, including an increase in tax rates for the very wealthy. The poll lines up with other surveys out this month that indicated the same feeling among a majority of Americans.

Sixty-five percent say Obama should raise rates for households making more than $250,000 a year, and nearly as many people-64%–say the president's re-election means he should protect Social Security from major budget cuts. Sixty-two percent of Americans say he also has a mandate to protect Medicare from fundamental change.

A third poll shows that six in 10 Americans think the major elements of the fiscal cliff would have a negative impact on the country. If Congress fails to pass a deal, a strong majority of Americans say that the resulting tax increases would have a bad effect on the economy, according to the Gallup survey released Tuesday.

Sixty-nine percent say the automatic spending cuts that will trigger at the beginning of the year say they will be harmful, while 64% say major cuts in defense spending will have a negative impact.

For the ABC News/Washington Post poll, 1,018 of adults were interviewed by telephone from December 5 through December 9. The poll has a sampling error of plus or minus four percentage points.

In the Bloomberg National Poll, 1,000 adults were interviewed by telephone from December 7 through December 10, with a sampling error of plus of minus 3.1 percentage points.

For the Gallup survey, 1,069 adults were questioned by telephone from December 8 through December 9, with a sampling error of plus or minus four percentage points.