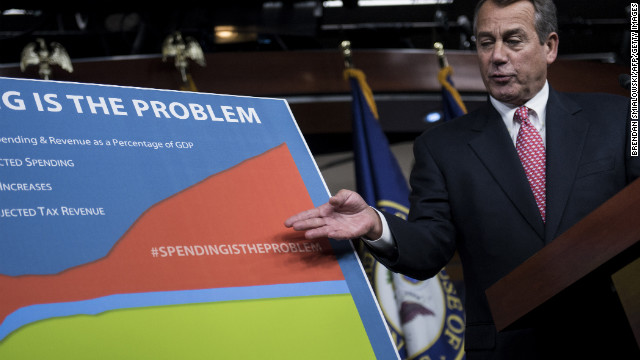 They may even be asked to do something drastic: work through the weekend.

"Members are advised that due to the ongoing negotiations regarding the fiscal cliff a weekend session is possible and therefore last votes for [next] week are not yet known," House Majority Leader Eric Cantor said Thursday.

Translation: a work week next week could bleed into the weekend before Christmas, a week after the date originally scheduled for final votes (this Friday).

The work which could prevent lawmakers from spending much time at home this month is the looming tax increases and spending cuts ahead in the new year, should Congress not approve an alternate deficit reduction plan. The cuts, known as the sequester, were designed by lawmakers and the White House as an incentive to reach a solution, but instead have led to a series of offers proposed and subsequently rejected by Obama and Boehner. Each has accused the other of not being serious in seeking a resolution.

Asked Thursday if he was optimistic about a deal to avert the cliff, Obama replied, "Still a work in progress."

He was walking to a holiday party near the White House shortly after Boehner spoke at a press conference on Capitol Hill.

"I've been pushing all year for us to address this problem, but here we are at the 11th hour and the president still isn't serious about dealing with this issue right here," he said, pointing at a chart designed to illustrate that the tax hike Obama supports is minor compared to projected spending increases over time. "It's this issue: spending."

The speaker will spend this weekend at home in Ohio, an aide told CNN, but did not rule out Boehner and Obama speaking this weekend, or even an early return to DC.

"There are cell phones and airports in Ohio," the aide said.

The two most recently spoke on Tuesday and met in person on Sunday.

Asked about hypothetical possible solutions, Boehner replied: "Ifs and ands and buts are like candy and nuts. If that were the case everyday would be Christmas.

"My goal is to get to an agreement with the president of the United States that addresses this problem."