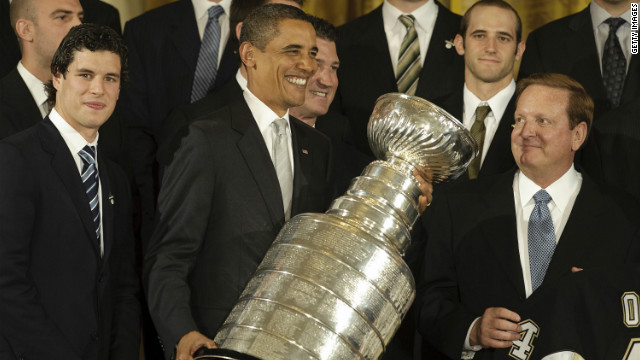 Fan-in-chief weighs in on hockey lockout

(CNN) - The standoff between owners of professional hockey teams and their players has left the ice empty and the sport's fans in the penalty box.

President Barack Obama weighed in on the months-long dispute in an interview on Thursday, chastising both sides to "remember who it is that's putting all that money in their pockets."

The National Hockey League has canceled games through the end of this month, scrapping over 500 matchups in a season which was set to start in mid-October.

The league and player's association leadership met with federal mediators this week, according to a posting on the NHL website Thursday. The hockey commissioner has previously suggested that if the season does not resume by sometime in January, too much of the season will have passed for the Stanley Cup playoffs to be held in the spring.

Obama said in the interview that he "shouldn't have to be involved in a dispute between really wealthy players and even wealthier owners. They should be able to settle this themselves."

He has declined to pick sides in past sports labor disputes, too, though he has encouraged the sides to come together.

"Is it just me or do we have to get our regular refs back?" he told an Ohio radio station in September when National Football League officials were locked out by their league. "I can't get involved with it, but I'm just expressing my point of view as a sports fan."

And in November 2011, he gave a thumbs-up to news that a tentative resolution to a National Basketball Association lockout had been reached. "Good deal," he told reporters, emerging from playing a game of hoops himself.