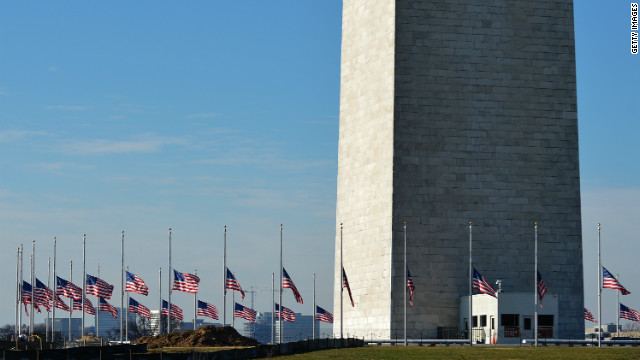 (CNN) – In the wake of one of the country’s deadliest mass shootings in Connecticut and the ensuing national conversation over U.S. gun laws, political figures are putting pressure on Washington to take serious action to prevent such tragedies.

A gunman entered Sandy Hook Elementary School Friday morning and opened fire on teachers and students killing 20 children and six adults. Hours after the shooting, President Barack Obama wiped tears from his eye and said "our hearts are broken today,” calling for “meaningful action to prevent more tragedies like this regardless of politics.”

The White House said Obama remains committed to reinstating a federal ban on assault weapons, a position he took in the 2008 campaign but failed to press during his first term.

Connecticut Governor Dan Malloy said in an address broadcast live on cable news networks Saturday that, "There will be a time soon for a discussion of public policy issues surrounding yesterday's events but what's important right now is love, courage and compassion."

And Mark Kelly, husband of former Rep. Gabrielle Giffords who was shot in Tucson last year, said the conversation on gun laws “can no longer wait.”

“My thoughts and prayers are with the families of the victims and the entire community of Newtown, CT,” Kelly said in a statement Friday after hearing about the tragedy. “This time our response must consist of more than regret, sorrow, and condolence. The children of Sandy Hook Elementary School and all victims of gun violence deserve leaders who have the courage to participate in a meaningful discussion about our gun laws – and how they can be reformed and better enforced to prevent gun violence and death in America."

Sen. Richard Blumenthal, a Democrat from Connecticut, also weighed in, promising to raise the issue when he returns to Washington.

“I think it’s time for the conversation to be renewed, for the dialogue to begin again and for the Senate to consider whether that kind of measure is necessary,” Blumenthal told CNN’s Wolf Blitzer in Newtown on Saturday, adding that he has been in touch with the White House but was unsure of the president’s plans to visit Newtown.

U.S. Rep. Carolyn McCarthy, a Democrat from New York whose husband was one of six killed in the Long Island Railroad shooting in 1993, said she hopes the president will follow through to enact "meaningful action” to prevent gun violence.

“We owe it to our children to work harder to reduce gun violence. The Second Amendment is the law of the land but it was never intended to allow murderers to take the lives of innocent kids. It’s our moral obligation as policymakers and as parents to do more to save lives.”

"With all the carnage from gun violence in our country, it's still almost impossible to believe that a mass shooting in a kindergarten class could happen," he said. "This is a national tragedy and it demands a national response. My deepest sympathies are with the families of all those affected, and my determination to stop this madness is stronger than ever.”

Dan Gross, president of the Brady Campaign to Prevent Gun Violence, said “we are better than this,” pushing for action as a “catalyst to demand the sensible change in our nation that is long overdue.” Gross added that the group was "moved" by Obama's visible emotion during his remarks and are "committed to working with him to channel it into the change that is too long overdue."