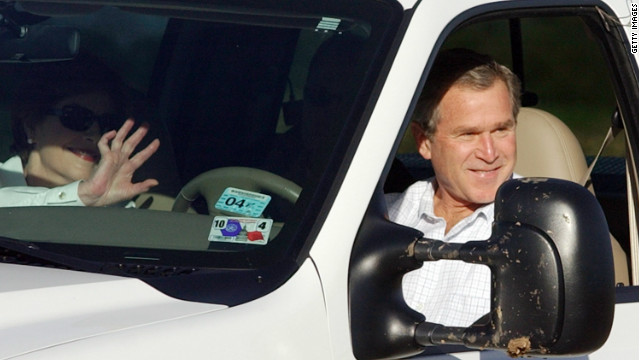 Bush to auction his truck for charity

(CNN) - It's a chance to own a piece of presidential history.

And it's got horsepower.

A pickup truck owned by former President George W. Bush goes on the auction block next month to benefit the Fisher House Foundation, the group said. It is an organization which provides free housing to the family members of servicemen and servicewomen receiving medical care away from home.

The 2009 Ford F-150 King Ranch 4×4 SuperCrew was purchased by Bush after his term ended in 2009. Bush and his wife have "used the truck to work around their ranch; entertain friends, family, and dignitaries and to give tours of their Crawford property."

"[T]he right airbag panel features President Bush's signature and a copy of a video showing him autographing the truck and driving it around his ranch in Crawford, Texas will be included with the purchase," the group announced.

Besides the significant ownership, the truck stands out on the automotive front: the industry watchers at MotorTrend described it in 2008 as "almost certainly the Ford Motor Company's single most important new-model design and development program this decade."

This truck, color white, has a 5.4-Liter V8 engine with 310 horsepower and a towing capacity of 11,200 lbs. The interior features adobe King Ranch premium leather interior. MotorTrend described it as looking "truck tough on the outside and is truck tough under the skin."

A truck of this model with standard options could catch upwards of $33,000 on the private market, according to data from the Kelley Blue Book.

But chances are the truck would sell for much more, and that the new owner wouldn't be buying for the truck's hauling capacity.

Bush suggested recently he may already have his eyes on a new ride.

On Wednesday, he said he was excited his daughter Jenna was pregnant with what would be his first grandchild.

In a telephone interview on NBC, he said, "I'll be the guy in the Ford 250 driving around the ranch with the grandchild,"

Bush's truck will go to the highest bidder at The Barrett-Jackson auction in Scottsdale, Arizona January 19.