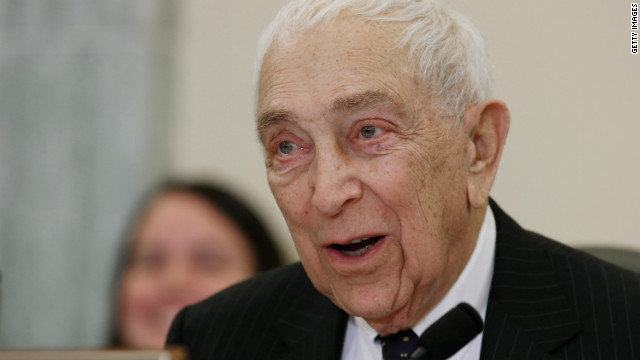 (CNN) - Democratic Sen. Frank Lautenberg plans to reintroduce legislation in the next Congress that would prohibit the sale of high-capacity magazines, his office confirmed Monday.

The senator from New Jersey is another member of the upper chamber with plans to put forth legislation limiting gun rights. Sen. Dianne Feinstein announced Sunday she'll reintroduce an assault weapons ban when Congress reconvenes in January.

Following last week's deadly attack on a Connecticut elementary school, which left 20 children and six adults dead by the shots of a lone gunman, the debate over gun control has ramped up in the last few days, with some lawmakers pushing harder than in years past to take action.

Lautenberg's office made a similar pledge to reintroduce his bill earlier this year after the shooting at an Aurora, Colorado movie theater, though the senator did not specify when he would do it. The Huffington Post first reported Monday that Lautenberg will reintroduce the bill next Congress.

The senator initially brought forth his legislation in January 2011 after a gunman shot Rep. Gabrielle Giffords in the head and killed six people in Tucson. The bill, titled "Large Capacity Ammunition Feeding Device Act," was packaged with two other bills that addressed the selling of firearms or explosives. However, the legislation did not gain traction in the Senate.

The bill calls for a ban on the sale of magazines that could hold 10 or more rounds of ammunition–similar to devices used in Tucson and Newtown. These types of magazines were rendered illegal when the assault weapons ban was in place from 1994-2004, but Congress did not vote to renew the ban.

"It will ban the sale, the transfer, the importation, and the possession. Not retroactively, but prospectively. It will ban the same for big clips, drums or strips of more than 10 bullets," she said on NBC's "Meet the Press."

The California senator added she believes the president will support the bill, which will also be introduced in the House.

Polling shows a majority of Americans favor such proposals. According to a CNN/ORC International Poll taken in August shortly after the Aurora shooting, 60% of Americans said they favored a ban on the sale of high-capacity magazines. Fifty-seven percent said they favor a similar ban on semi-automatic assault weapons.