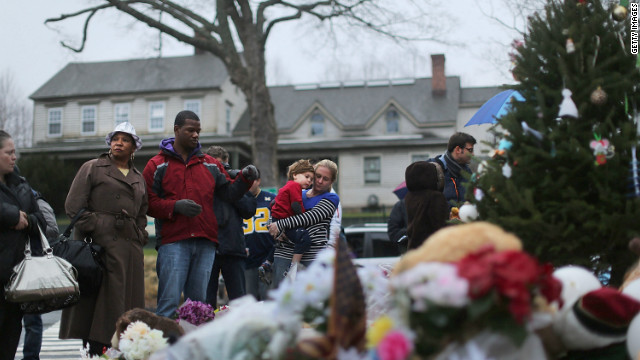 Three polls conducted immediately after Friday's tragedy indicate that the shootings may be changing some minds.

Other recent high profile incidents, such as the shootings in Tucson, Arizona in January 2010 that left six dead and some, including of Rep. Gabrielle Giffords, severely injured, the mass shooting this past July at a movie theater in suburban Denver, Colorado that left 12 dead, and shootings two weeks later at a Sikh temple in suburban Milwaukee, Wisconsin, where six people were killed, horrible as they were, barely moved the needle when it came to polling on gun control.

During the 1990's, national polling indicated that a majority of Americans supported stricter gun laws. But public opinion has shifted since then, and the public nowadays appears divided on the issue.

According to the most recent CNN/ORC International survey, which was conducted in early August after the Colorado and Wisconsin shootings, 50% supported no restrictions or just minor restrictions on owning guns, with 48% backing major restrictions on the owning of guns, or making guns illegal for everyone except law enforcement and other authorized personnel. There were similar findings in an ABC News/Washington Post poll conducted around the same time, with 50% of registered voters saying they favored stricter gun control laws and 48% opposing such measures.

But the deaths of 20 young children could affect the public conversation over gun control in a way that the past tragedies failed to have an impact.

"The Clinton gun control victories in the 1990s had their distant roots in a school shooting in Stockton California. Public opinion about guns doesn't get reshaped overnight each time there's a shooting, but that precedent suggests that an event that victimizes children could have more impact than most in tilting the balance toward support for measures to restrict access to guns," says CNN Senior Political Analyst and National Journal Editorial Director Ron Brownstein

A survey from ABC News/Washington Post released Monday afternoon is the first sign of early evidence that the slayings at Sandy Hook Elementary School will make an impact.

According to the survey, conducted Friday through Sunday, 44% now strongly support stricter gun laws, with 32% opposed. That's the first time in ABC/Washington Post polling in five years where significantly more people favor rather than opposed stricter gun control measure. And for the first time in surveys dating back to 2000, less than 50% say the best way to reduce gun violence is to enforce existing laws. The number of people saying the best way is to pass new laws edging up to 32%, the highest level since 2000 in ABC/Washington Post polling.

A Pew Research Center survey also conducted immediately after the massacre, has similar findings. By a 47%-44% margin, those questioned said the shootings reflect broader problems in society rather than just being isolated acts from troubled individuals. The 47% who say the Connecticut shootings reflect broader problems in society is up from the 24% who felt that way after the Colorado incident and the 31% who felt that way following the Arizona shootings in 2011.

Support for more stringent gun laws was highest in a CBS News poll out late Monday, which showed 57% of Americans support tightening restrictions. The number had increased from 39% when the poll was conducted in April.

National polling indicates that the trend away from stricter gun laws over the past decade appears to be primarily among groups that are the most resistant to Democrats, and that among those who vote for Democrats, there remains strong backing for gun control.

Brownstein suggests that the half of the country that opposes gun control is the half that that rarely supports Democrats, and that those who do back President Barack Obama and other Democrats back tougher gun control.

"In the same way that the movement away from the party of blue-collar and older-white voters made it easier for President Obama to embrace more liberal positions on gay marriage, legalizing DREAM Act students, and providing contraception in health care reform, the same dynamic could finally overcome his hesitation on gun control. The fact is that Democrats have been paralyzed on this issue for fear of losing voters they have already lost; and after an election in which Obama won only one-third of white men, the constituency most resistant to gun control, and still won a solid victory, the party's paralysis doesn't make much sense electorally," adds Brownstein, in an analysis of Pew Research Center polling on gun control.

The new ABC News/Washington Post poll was conducted December 14-16, with 602 adults nationwide questioned by telephone. The survey's sampling error is plus or minus 4.5 percentage points.

The new Pew Research Center poll was conducted December 14-16, with 746 adults nationwide questioned by telephone. The survey's sampling error is plus or minus 4.3 percentage points.

The new CBS poll was conducted December 14-16, with 620 adults nationwide questioned by telephone. The survey's sampling error is plus or minus 4 percentage points.