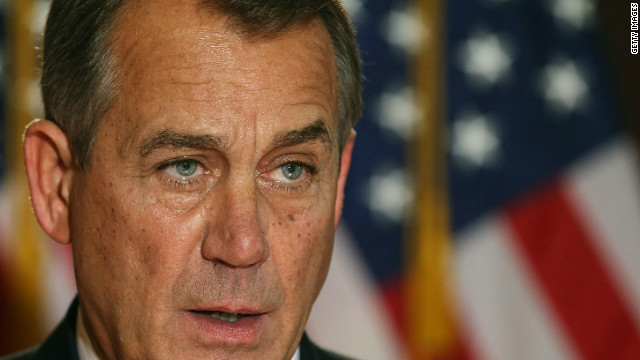 AGENDA SET: PRESIDENT OBAMA PROMISES GUN LEGISLATION IN WEEKS… The president said the vast majority of gun owners in America handle firearms responsibly, but having more than 10,000 Americans killed every year by guns is "violence we cannot accept as routine." "We won't prevent them all, but that can't be an excuse" not to try, the president added. … MEANWHILE A NEW CNN POLL SHOWS A COUNTRY DIVIDED… A bare majority now favors major restrictions on owning guns or an outright ban on gun ownership by ordinary citizens and more than six in 10 favor a ban on semi-automatic assault rifles. … A 53% majority still believes that attacks will continue to happen regardless of any action taken. – Keating Holland

DEVELOPING: FISCAL CLIFF DEBATE STALLS, PRINCIPALS TAKE TO BULLY PULPITS… In a candid assessment of the tough fiscal cliff negotiations, President Barack Obama said Wednesday that Republicans are focused too much on besting him personally instead of thinking about what's best for the country. … In response to the president, Speaker of the House John Boehner announced that the House would pass his Plan B proposal on Thursday, a plan the president said “violates the core principles” his recent re-election was all about.

SPEAKER OF THE HOUSE JOHN BOEHNER AT A CAPITOL HILL NEWS CONFERENCE: “The president's offer of $1.3 trillion in revenues and $850 billion in spending reductions fails to meet the test that the president promised the American people, a balanced approach. … Tomorrow, the House will pass legislation to make permanent tax relief for nearly every American, 99.81% of the American people. And then the president will have a decision to make. He can call on Senate Democrats to pass that bill or he can be responsible for the largest tax increase in American history.”

DÉJÀ VU: Boehner on December 12 at a news conference after the Republican conference meeting: “His (Obama’s) plan does not fulfill his promise to bring a balanced approach to solving this problem; it's mainly tax hikes, and his plan does not begin to solve our debt crisis.”

TRAIL TRIVIA
(Answer below)
On this day in history, President Bill Clinton became the second president to be impeached by the House of Representatives. What were the two charges on which he was impeached and what two charges failed?

Today’s presidential press conference held a mirror up to the news cycle and revealed a country torn between a rush to get its fiscal house in order and an America whose heart is still broken over seeing caskets too small to comprehend.

Obama walked swiftly to the White House podium and outlined a strident and detailed push for gun control. He spoke for eight minutes about guns in a way he had not previously addressed in his prior four years as president.

Then, he turned to the reporters, who promptly acted as if the president had not said anything of note and promptly changed the subject.

To be fair, the questions often hold presidents accountable on issues they don’t want to talk about. But, to most observers, it seemed tone deaf as Obama called on a reporter each from the Associated Press, The Wall Street Journal and Politico, and all three ignored the matter on America’s mind and instead each asked questions about the fiscal cliff.

To be fair to the larger White House press corps, the president chooses who gets the opportunity to ask him questions. Nonetheless, the questioning seemed tone deaf.

Observers on Twitter, often an outlet of instant critiquing of news events, chimed in immediately, “In addition to gun control, we need a program whereby broad swaths of Washington press corps are reassigned to Reality, USA,” Clara Jeffrey of Mother Jones tweeted.

David Jackson of the USA Today turned the questions back to guns, but it was ABC’s Jake Tapper whose question caught our attention as it seemed to change the event back to what it was supposed to be – a newsworthy and difficult conversation on guns: “It seems to a lot of observers that you made the political calculation in 2008 in your first term and in 2012 not to talk about gun violence. You had your position on renewing the ban on semiautomatic rifles that then-Sen. Biden put into place, but you didn’t do much about it. This is not the first issue - the first incident of horrific gun violence of your four years. Where have you been?”

The president’s response included, “I think all of us have to do some reflection on how we prioritize what we do here in Washington. And as I said on Sunday, this should be a wake-up call for all of us to say that if we are not getting right the need to keep our children safe, then nothing else matters.”

Leading CNNPolitics: Obama: Biden to lead effort against gun violence
President Barack Obama said Wednesday that Vice President Joe Biden will lead an administration effort to develop recommendations no later than January for preventing another tragedy like last week's school shooting in Connecticut that left 20 young children and eight adults dead. The vast majority of gun owners in America are responsible, but the more than 10,000 Americans killed every year by guns was "violence we cannot accept as routine."

Leading Drudge: Wal-Mart Sells Out
With President Barack Obama endorsing sweeping gun restrictions in the wake of the school shootings in Newtown, Connecticut, prices for handgun magazines are surging on EBay (EBAY) and semi-automatic rifles are sold out at many Wal-Mart Stores Inc. (WMT) locations.

Leading HuffPo: Right-Wing Myths: Busted
An investigation into the State Department's preparations for and management of the terrorist attack in Benghazi, Libya, has concluded that "systemic failures and leadership and management deficiencies" within the department played a major role in the devastation that took place there last September. Four Americans were killed in the overnight raid on the compound, including U.S. Ambassador Chistopher Stevens. The ensuing controversy over the incident, and the administration's handling of it, threatened to derail President Barack Obama's reelection campaign through the fall. – Joshua Hersh

Leading Politico: Obama says GOP should 'take the deal'
Amid signs that negotiations are stalled, President Barack Obama said Wednesday that it is “puzzling” that House Speaker John Boehner hasn’t accepted his latest fiscal cliff offer, saying what separates them is a few hundred billion dollars in spending cuts. Obama, speaking in the White House briefing room, said he is “eager to get something done” to avert tax increases and automatic spending cuts before Christmas. – Jake Sherman and Carrie Budoff Brown

Leading The New York Times: Obama to Give Congress Plan on Gun Control Within Weeks
President Obama declared Wednesday that he would make gun control a “central issue” as he opens a second term, submitting broad new gun control proposals to Congress no later than January and committing the power of his office to overcoming political opposition in the wake of last week’s school massacre. – Michael Shear

- President presses reality check for Republicans -
OBAMA AT A WHITE HOUSE NEWS CONFERENCE: “At some point, there has got to be, I think, recognition on the part of my Republican friends that - take the deal. They will be able to claim that they have worked with me over the last two years to reduce the deficit more than any other deficit reduction package. … They should be proud of it, but they keep on finding ways to say no as opposed to finding ways to say yes and I don't know how much of that just has to do with it is very hard for them to say yes to me. At some point, they've got to take me out of it and think about their voters and think about what's best for the country and if they do that, if they're not worried about who's winning and who's losing, you know, did they score a point on the president, that they extract that last little concession, that they, you know, forced him to do something he really doesn't want to do, just for the heck of it and they focus on what's actually good for the country, I actually think we can get this done.”

- Days until Christmas clearly on the mind of House leadership -
HOUSE MINORITY LEADER NANCY PELOSI: “We're now less than one week from Christmas, two weeks from the fiscal cliff, there's still time for us to come to agreement, and I hope that time will be well used. In the last 24 hours the question that I get from my caucus and some of you, is what is the speaker trying to prove by going to his, what we call Plan B, 'befuddled'? Is he trying to prove by bringing the two bills to the floor tomorrow that the Republicans are here to protect the wealthiest people in our country at the expense of the middle class? If so, he will do that tomorrow.”

- Tim Scott points to 'moral decay' after school shooting -
REPUBLICAN REP. TIM SCOTT OF SOUTH CAROLINA, THE NEW APPOINTEE TO REPLACE SEN. JIM DEMINT, IN AN INTERVIEW WITH CNN: “I think the solutions are not necessarily in new legislation. Perhaps the solution starts with us examining the mental condition of the person and the persons in the past that have had the desire to create the atrocities that we've seen recently. Mental illness should be a major part of the conversation going forward. We should also look at an opportunity for us to engage this entire culture of moral decay and violence. When we start looking for solutions as the response of a crisis, I think we're starting in the right place. If we draw conclusions quickly, we may draw flawed conclusions.” – Ashley Killough LINK

- What do Lieberman and Mick Jagger have in common? -
MICHAEL CHERTOFF, FORMER HOMELAND SECURITY SECRETARY, AT A FAREWELL EVENT FOR SEN. JOE LIEBERMAN: “This is not my first farewell for Chairman Lieberman. He's had more farewells than Rolling Stones Farewell Tours.”

Gut Check Flashback… In a 2005 interview with CNN’s Frank Cesno, Robert Bork discusses his career:
Frank Sesno: How did that feel, personally, to be the first one out of the cannon?
Robert Bork: Well, I knew what was happening. The core of the issue was, they were afraid I would vote to overrule Roe against Wade. And they were quite right.
Sesno: And your name became a verb.
Bork: My name became a verb. And I regard that as one form of immortality.
Sesno: To Bork means what?
Bork: I think to attack with - to attack a person's reputation and views unfairly.
Sesno: And is it inevitable that future Supreme Court nominees are going to get Borked?
Bork: Oh, yes.
Sesno: Part of the culture wars?
Bork: Yes.

Two other articles of impeachment failed. By a 205-229 margin, the House failed to pass a Clinton impeachment over perjury in the Paula Jones case, involving an Arkansas state employee who sued Clinton over alleged sexual harassment. And the most lopsided vote occurred when the House accused Clinton of abuse of power – the vote was 148 to 285.

The votes made Clinton the second president to be impeached.

After the House passed two of these measures, the proceedings went to the Senate – the first time the Senate had seen a presidential impeachment since President Andrew Johnson in 1868. On February 12, 1999, President Clinton was acquitted of both articles of impeachment – neither vote achieved the necessary 66 votes.