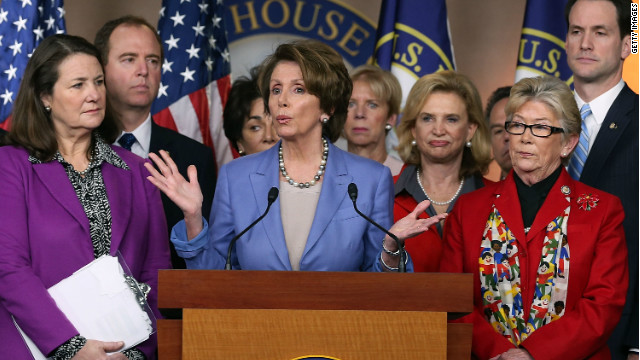 "Here in Congress, what we need now are not more words. What we need is action," Pelosi said, announcing Rep. Mike Thompson, a wounded Vietnam veteran and "avid hunter" from California, as the leader of the group.

Pelosi said the task force will work towards restoring the assault weapons ban, strengthening the background check system, and addressing mental health and violence issues. Asked why she never passed gun control during her time as speaker, Pelosi said she didn't want her members to "walk the plank," knowing that a gun control measure would never pass in the Senate.

"Let's just face it," she added. "Money. Big money out there on the side of those who would be opposed to gun safety."

However, Pelosi argued it was time for real change, saying last week's elementary school shooting "struck the heart of every American."

"We have to respond," she said.

For his part, Thompson focused on a need to eliminate high-capacity magazines, the same devices found on the firearms used by the shooter in the Connecticut massacre.

The two lawmakers were joined at a press conference by other Democratic House members urging change on gun control. Across town, President Barack Obama was making similar remarks, announcing Vice President Joe Biden as the leader of a White House effort to come up with specific proposals.

Rep. Diana DeGette of Colorado said she was pushing for a bill she co-sponsored in January 2011, shortly after a gunman shot Rep. Gabrielle Giffords in the head and killed six people in Tucson. The legislation would prohibit the sale or possession of large-capacity magazines that hold more than 10 rounds of ammunition. After it was introduced last year, the bill did not go far in the Republican-controlled House.

But DeGette said she hopes House Speaker John Boehner will bring the bill to a vote as soon as Friday, a faster timeline than proposals in the Senate or action by the White House.

"We started Monday when we got back here trying to get more co-sponsors. In over 24 hours, we've picked up 21 co-sponsors, and we believe we'll have even more by the end of today," she said, adding that no Republicans have signed on.

"It would send a message to the moms, the dads and the people of this country that we're serious," she continued.

Rep. Carolyn McCarthy, whose husband was killed in a mass shooting on a Long Island train in 1993, is a co-sponsor of the bill and a longtime, outspoken advocate against gun violence. She told CNN she plans to ask Boehner for a meeting after the fiscal cliff situation is resolved.

"This is political suicide for him," McCarthy said, referring to Barber's decision to stand with the group of representatives at the press conference.

Some of those speaking out at the House event Wednesday were critical of lawmakers who have called for an alternative response, namely conservatives who push for arming more citizens as a means of self-defense.

Texas Gov. Rick Perry, for example, said Monday that anyone that has a concealed handgun license should be permitted to carry their gun "anywhere in the state." Meanwhile, Virginia Gov. Bob McDonnell suggested he was open to a discussion on arming school personnel, including teachers.

Rep. Jim Himes of Connecticut, however, argued Perry's notion that "packing heat will make safer" is baseless and "not founded in reality."

"It is founded in the fantasy of testosterone-laden individuals who have blood on their hands for articulating that idea," he said.

As one of the closing speakers, Rep. Bobby Rush of Illinois urged immediate action, saying "we cannot allow the kindergartens of America to become killing fields."

When Rush spoke about death of his own son, Huey, who was shot and killed at the age of 29 in Chicago, the Democrats standing at the podium next to him were clearly touched by his description of a scene he says still haunts him.