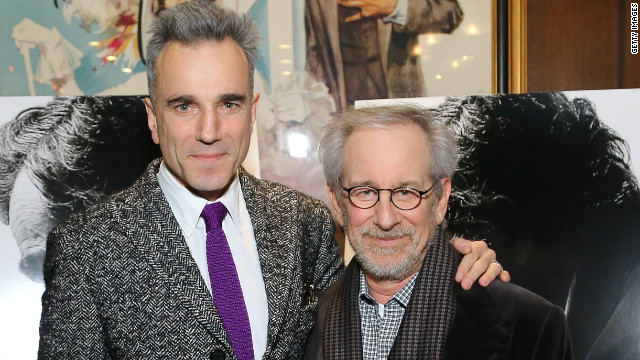 (CNN) - Senators are usually the stars of Washington, but on Wednesday they had several Hollywood stars in their midst for a screening of the movie "Lincoln."

"It's a great honor to be invited here by Senator Reid, and to be ready to run the film and see both sides sitting in the same room to watch a president who put the people out in front of the abyss," Spielberg said.

"I'm very, very proud that we get to have this moment."

Also in attendance were Doris Kearns Goodwin, the historian and author who wrote the book behind the movie; screenwriter Tony Kushner; and producer Kathleen Kennedy.

The screening comes as the political establishment in Washington is attempting to hash out a deal to avoid the fiscal cliff, and as many are calling for legislation to prevent future mass shootings such as one last week at a Connecticut elementary school.

Reid said the movie screening presents "an opportunity for bipartisanship."

“For me it’s what I work with every day but it’s the good the American people have seen and will see watching this movie what the great Abraham Lincoln did to get things done,” he said.

House members were invited to a screening of "Lincoln" in late November organized by Rep. Kevin McCarthy.

The movie has grossed over $100 million since it opened in mid-November.