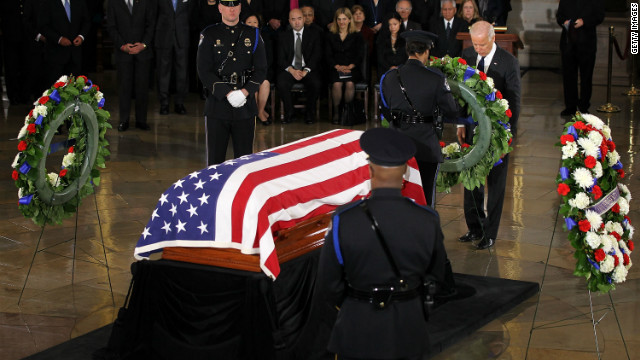 (CNN) - The partisan gridlock in Washington came to a halt Thursday morning as members of both parties gathered to bid farewell to the late Sen. Daniel Inouye, the second longest serving senator in U.S. history.

"Dan was a vibrant and vital presence in the Senate, and in death he'll remain a legend," Senate Majority Leader Harry Reid said at a ceremony held in the Capitol Rotunda.

The Hawaii Democrat, who had represented the island in Congress since it became a state 53 years ago, passed away Monday. He was 88.

He's to lie in state in the rotunda, a high honor reserved for presidents and other significant civic figures. At the ceremony Thursday, family members, senators, staff and other dignitaries circled around his coffin, draped with a U.S. flag.

"While this may be a quiet ceremony for a quiet man, it will endure long after the respects are paid," House Speaker John Boehner said. "For when this rotunda returns to life and the tour guides give their pitch, they will always speak of Daniel Inouye, the gentleman from Hawaii and one of freedom's most gallant champions."

A service will be held at the National Cathedral on Friday, and his final memorial service will take place Sunday at Hawaii's National Memorial Cemetery of the Pacific.

A World War II veteran who received the Medal of Honor, Inouye enlisted in the U.S. Army shortly after the attack on Pearl Harbor. Because of his Japanese ancestry, Inouye was considered an "enemy alien," Vice President Joe Biden said at the ceremony.

"He had to fight for the chance to fight for his country, not just to prove that he was a loyal American but because he knew, he knew what was at stake," Biden continued. "Because it was the right thing to do."

He served in an Army unit made up of Japanese-Americans, and his battalion was the most decorated unit of war. While serving, he lost an arm charging machine gun nests in San Terenzo, Italy.

"Danny had the most fulsome embrace of life with one arm than any man or woman could have with two," the vice president said in his 20-minute tribute.

Biden served alongside Inouye for 36 years in the Senate, where the two became close colleagues and family friends. He described Inouye as a "quintessential American," highlighting his fierce loyalty, generosity and integrity.

"Most all of us who got to know him loved Danny. How many of your colleagues can you say that about? That you can turn and say and mean it 'I loved this man. I loved this woman."

Inouye served in Congress as the island's first U.S. representative before becoming senator three years later, a job he held for the last 50 years.

He gained national notoriety as a member of the Senate panel investigating the Watergate scandal in the 1970s. As president pro tempore of the Senate, he was third in line of succession to the presidency.

After he passed away Monday evening at the Walter Reed National Military Medical Center with his wife and son at his side, his office stated that his last word was "Aloha."

"And it's with a heavy heart that I and we bid 'Aloha, goodbye, I love you' to a friend and legend of the Senate," Reid said.