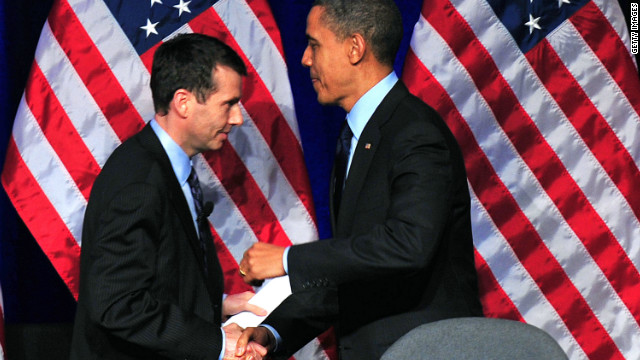 Washington (CNN) - As House Speaker John Boehner prepared to leave the Capitol Friday, President Barack Obama's top political adviser David Plouffe told Democratic activists the nation's attention on the fiscal cliff will increase now that Washington has failed to reach a deal. According individuals on the call, he asked Obama supporters to help spread the message that the president is doing what he can.

Plouffe offered aid for several progressive priorities in exchange for their help messaging on the president's work to get a deal to avert the fiscal cliff, according to participants.

"We want to make sure people know that the president has a solution that has already passed the Senate," Plouffe said, according to an individual on the call. "If you help us we'll do all the other things you care about like climate and immigration."

Plouffe was speaking on a conference call with progressive groups organized by the White House as negotiations to avert the fiscal cliff reached a standstill.

Supporters of the president were encouraged to outline how failing to reach a deal would affect Americans, according to several individuals on the call.

"We rely on organizations to get clear information out to constituents about what will happen," Plouffe said, adding that groups should "build public support for the president through the holiday season," according to a participant.

According to sources, the president's top strategist suggested the White House believes they've been more than accommodating in reaching a compromise.

"We can't cut much more," Plouffe said, according to an individual on the call. "We can a little, but we've already come halfway." And he laid blame for the failure to reach a deal at the feet of House Republican leaders who, he said, are "unwilling to take on their base."

"We're not willing to sign a bad deal," Plouffe said on the call, as told to CNN by one participant on the call, one of many the administration will hold with supporters.

However, unemployment benefits remain one unanswered question. Plouffe said the president is insistent those are extended before they expire at the end of the year.

He acknowledged Washington should act to tackle long-term deficit reduction, spending and entitlement reform, but in the meantime Congress should not let what he described as "dysfunction," harm the middle class.

Bush-era tax cuts for all Americans are set to expire at the end of the year and tax rates have been at the center of ongoing negotiations between Congress and the White House.

Plouffe said the administration has moved halfway, which is the definition of compromise. Although the president originally said he would not support tax increases for individuals making over $200,000 a year and couples making over $250,000 a year, the White House upped that level to $400,000 as part of the negotiations. Plouffe said that level of compromise was generous, especially considering Democratic support in the November election.

"What's the best message?" Plouffe asked. "We need to protect the middle class, trying to make sure taxes don't go up for people under 250,000, the only reason that's not happening is that Republicans are trying to protect upper class."

Boehner brought negotiations to a halt when he introduced his Plan B Tuesday that he described as a fallback option. On Thursday it failed to gain sufficient GOP support. The measure proposed maintained tax rates for most Americans while allowing rates to return to higher levels for those making over $1 million per year.

Boehner left the capitol Friday and publicly put the onus on the president and the Senate to reach a compromise.