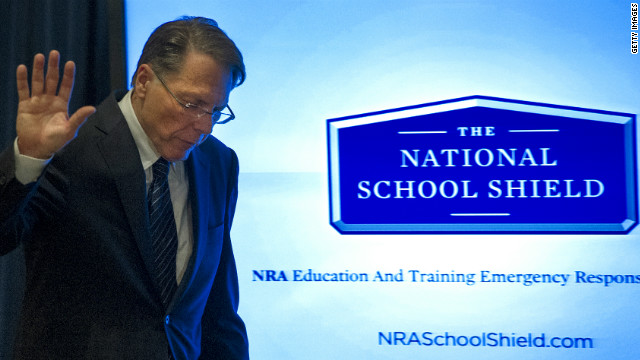 Lawmakers from both parties have agreed that some changes are needed following the Newtown, Connecticut, shooting on December 14 that left 28 people dead, including 20 children. But while Democrats advocate new legislation making it harder to obtain military-style firearms, Republicans claim such measures have proved ineffective in the past.

The NRA, the top lobbyist for gun manufacturers, asserted on Friday that armed guards in schools were the best prevention against a similar tragedy. That proposal, along with vows from Democrats to reintroduce bills banning assault weapons and high-volume ammunition clips, was met with skepticism Sunday from Sen. Lindsey Graham, a South Carolina Republican.

"We had an armed guard in Columbine, we had an assault ban. Neither one of them worked," Graham said on NBC's "Meet the Press."

"We're talking about preventing mass murder by nontraditional criminals, people who are not traditionally criminal, who are not wired right for some reason," he continued. "And I don't know if there's anything Lindsey Graham can do in the Senate to stop mass murder from somebody that's hell-bent on doing crazy things."

Another Republican, Sen. John Barrasso of Wyoming, also cast doubt on the NRA's proposal, saying a national effort to place guards with guns in schools was misguided.

On CBS' "Face the Nation," GOP Sen.-designate Tim Scott said Americans shouldn't "rush to judgment" on the NRA's plan, but didn't offer an endorsement of the plan himself.

And Rep. Jason Chaffetz, a conservative from Utah, said on NBC he was worried about arming educators since he "had science teachers in high school who can't negotiate a Bunsen burner for goodness sake."

"I wouldn't suggest necessarily that we give everyone a gun. It's not for everybody," he continued. The NRA has specified it is not advocating teachers carry guns in school; rather, the group suggests schools could follow the example of malls and movie theaters that employ retired or off-duty policemen.

Nearly every Republican appearing on the Sunday talk shows agreed that new gun restrictions were the wrong path to take in the aftermath of the Connecticut shooting - though some expressed an openness to hearing all options put forward.

Republican Sen. Johnny Isakson of Georgia said he wanted President Barack Obama's newly formed team on gun violence to look into every aspect that could lead to a massacre like the one in Newtown, but that previous bans on assault weapons had done little to stop senseless killing.

"Bans alone don't solve the problem," he said on ABC's "This Week," pointing to a prohibition on military-style weapons that was in effect in 1999 when the shooting at Columbine High School claimed the lives of 12 students and one teacher.

Barrasso said Americans "can get false sense of security from Washington, and in passing more laws. But we need real solutions to a significant problem in our country, and I'm not sure passing another law in Washington is going to actually find a real solution."

And Graham wondered how a ban preventing him from purchasing another AR-15 semi-automatic rifle would thwart another tragedy like the one in Newtown.

"If you deny me the right to buy another one, have you made America safer?" he asked.

Democrats say yes. Sen. Joe Lieberman, the retiring independent senator from Connecticut who caucuses with Democrats, said bans making it impossible to buy the type of weapon used in Newtown would reduce the chance of similar shootings in the future. While Republicans' intransigence on the issue means such a ban won't come easily, he said, the public is ready for new laws.

"It's going to take the American people getting organized, agitated, and talking to their members of Congress," Lieberman said on CNN's "State of the Union."