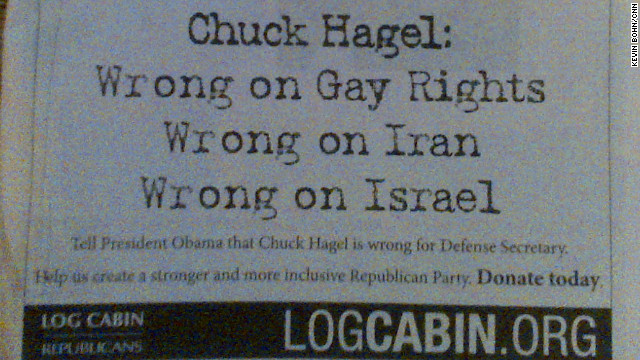 “Tell President Obama that Chuck Hagel is wrong for Defense Secretary. Help us create a stronger and more inclusive Republican Party,” it read.

Hagel, who represented Nebraska as a Republican in the U.S. Senate, has come under fire from both conservatives and liberals for past remarks on gays, and for his positions on Iran and Israel.

Gay rights groups hit Hagel for his 1998 remarks questioning whether a nominee for an ambassadorship was suitable because he was "openly, aggressively gay." Hagel issued an apology for the remark last week.

The former senator has also been lambasted for his opposition to unilateral sanctions against Iran, as well as for votes opposing labeling Iran's Islamic Revolutionary Guard Corps as a terrorist organization.

Hagel's opponents have also struck upon comments that some perceive as anti-Jewish in a 2007 interview, when he said the "Jewish lobby intimidated lawmakers."

The now 5-year-old comment set off a firestorm of protests from Jewish leaders and advocacy groups this week as Hagel's name was increasingly mentioned for the Pentagon's top position.