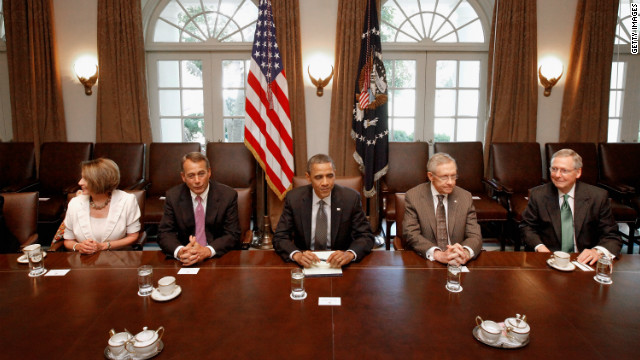 Washington (CNN) - Congressional leaders spoke Friday after meeting about the fiscal cliff with President Barack Obama at the White House.

Obama made a statement shortly before 6 p.m.

McConnell and Reid spoke on the Senate floor.

Reid said, “we had a constructive meeting. We certainly hope that something positive will come from that. The Republican leader and I and our staffs are working and we’ll see what we can come up with. We shouldn't take a long time to do that. …

“If we come up with something, it’s not that easy. We’re dealing with big numbers and some of the stuff that we do is somewhat complicated. But I think it was a very positive meeting,” he said. “There was not a lot of hilarity in the meeting, everyone knows how important it is. It was a very serious meeting and it took an extended period of time as you all know waiting for us.”

McConnell spoke immediately after Reid, saying, “I share the view of the majority leader. We had a good meeting down at the White House.

“We are engaged in discussions, the majority leader and myself and the White House, in the hopes that we can come forward as early as Sunday and have a recommendation that I can make to my conference and the majority leader [Reid] can make to his conference and so we’ll be working hard to try and see if we can get there in the next 24 hours,” he said. “And so I’m hopeful and optimistic.”

Boehner’s office issued a statement which said he “reminded the group that the House has already acted to avert the entire fiscal cliff and is awaiting Senate action.”

“The leaders spent the majority of the meeting discussing potential options and components for a plan that could pass both chambers of Congress,” the statement read. “The speaker told the president that if the Senate amends the House-passed legislation and sends back a plan, the House will consider it – either by accepting or amending. The group agreed that the next step should be the Senate taking bipartisan action.”

In a paper statement, McConnell’s office also pointed to legislation which had passed the House.

“While the House already passed legislation in August to prevent tax hikes (a proposal Sen. McConnell supports), the President and Congressional leaders today agreed that the Senate must now act,” the statement read. “This will require a bipartisan approach. Members of the Senate will continue to work toward producing a bipartisan package in a timely manner to protect American taxpayers and jobs from a massive tax hike in January.”

Pelosi said the meeting was "constructive" and "candid."