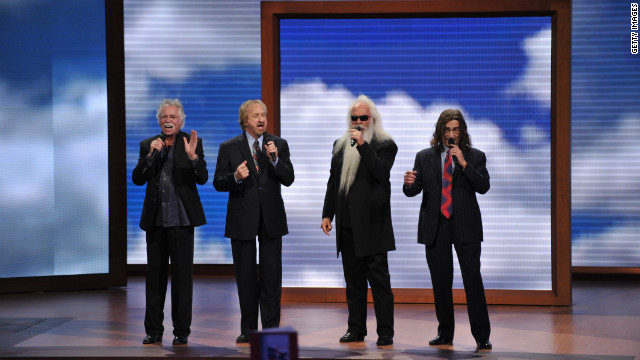 (CNN) - The Oak Ridge Boys, the gospel-turned-country crooners who had their heyday in the mid-1970s and early 1980s, gave the hospitalized former President George H.W. Bush "a real shot in the arm" on Friday.

"That is great," Bush can be heard saying in a recording provided by the group after their rendition of "Amazing Grace."

Former first lady Barbara Bush called the band Friday to request a special performance, the group said, which they gladly provided by phone from their offices. The former president, 88, has been hospitalized in Houston for over a month, initially for bronchitis and a lingering cough. He was moved out of an intensive care ward to a standard patient room on Saturday, his spokesman said, after receiving the upgraded attention to treat a fever.

Band member Joe Bonsall said, "We asked what song he would like to hear and he said 'Elvira,' so we blasted some ‘oom pop a mau mau’s’ in the direction of Houston, Texas."

Bush's spokesman said Friday that "his exchanges with doctors and nurses now include singing," but did not specify what songs.

The Oak Ridge Boys, who found their political tune first in Bush, have said they became friends with him 30 years ago when he was Ronald Reagan’s vice president.

"We don't take our politics to the stage, but back in ‘82 when George Bush was vice president, we were doing a barbecue on the congressional front lawn, where they bring all the parties in and they bring their families in, and we were doing a sound check that afternoon, and here came a long lanky guy with the plastic bag full of goodies over his shoulder," member Duane Allen said in an interview with Politico.

"And he started literally running towards the stage, and as he got closer we realized - this is Vice President George Bush. We had heard that he liked our music, but he came up on stage, gave us all vice presidential T-shirts, and he started requesting songs."

The friendship has continued, they said in the interview.

"Every year we go up to Kennebunkport (Maine) - or at least every other year - with our wives and families and spend a couple of days with the Bushes at what is probably the greatest bed and breakfast in the history of the world," Bonsall said.

Member William Lee Golden said he considers Bush and his family "some of our most treasured friends."

Bonsall also remembers being onstage with Bush when he received the GOP presidential nomination in 1988.

They refer to him as "our president" and said they were receiving reports on Bush's health leading up to their song on Friday.

"Words cannot properly express how much The Oaks' special performance meant to the president and the Bush family," Bush's office said in a statement. "This friendship goes back many years, and what happened yesterday gave the President a real shot in the arm as he, thankfully, continues to improve. The Bushes continue to feel so blessed to have so many friends like The Oaks, and wish to thank one and all for their prayers and good wishes."

After their performance, "we all smiled and went back home," Bonsall said in a statement. "We had just sung a few songs for our president. We have been doing so since 1982. Get well soon, sir. We love you. America loves you. The world loves you!"

The band also performed at the 2012 Republican National Convention in Tampa, Florida, and expressed their support for GOP presidential nominee Mitt Romney.