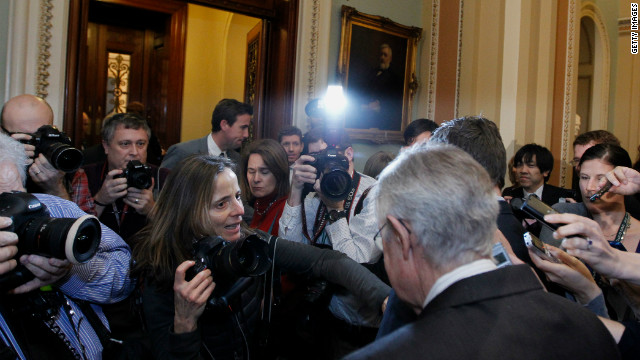 Washington (CNN) - The key figures involved in fiscal cliff talks have released few details about negotiations since they restarted Sunday afternoon. But we do have a clearer snapshot of the major points of debate before Vice President Joe Biden and Senate Republican Leader Mitch McConnell took over negotiations on Sunday. CNN's Capitol Hill team collected this information from sources and lawmakers involved in and briefed on negotiations up to that point.

• Income tax rates: Over the weekend, Democrats raised their threshold for tax increases to $450,000 in family income ($400,000 for individuals), a Democratic source tells CNN's Dana Bash. Party leaders had started talks at the $250,000 level, with President Barack Obama at one point offering $400,000 as part of a larger deal. Senator Dick Durbin, D-Illinois, told CNN on Sunday that leaders were discussing a permanent, not temporary, extension of most tax rates. It's unclear how that relates to possible tax reform in the future.

Democrats have said they are discussing the issue as part of negotiations, but stress that they consider this a tax gain for the wealthy. A possible compromise could be the 2009 estate tax rates, which set the top rate at 45% and exempted estates up to $3.5 million. Several senators mentioned the 2009 rates on Sunday, but stressed that they are not directly involved in talks and were not sure whether negotiators were focused on those numbers.

• Capital gains tax rate: On Saturday, the two sides traded offers to create a 20% capital gains tax rate for higher incomes, Sens. Dick Durbin, D-Illinois, and Olympia Snowe, R-Maine, separately told CNN, while lower incomes would keep the current 15% rate. But, the senators said, the two sides had not agreed on the income level that would trigger the higher taxes. Snowe said $250,000 was one level discussed. If Congress doesn't act, the current capital gains rate of 15% will automatically go up to 20% for all investors.

• AMT patch: leadership and Senate sources on both sides told CNN that negotiators went back and forth over whether to do a short-term or permanent fix for the Alternative Minimum Tax, which would otherwise hit an estimated 30 million additional taxpayers. The patch is expensive either way, cutting revenue roughly $92 billion for one year or more than $900 billion for 10 years, according to the Congressional Research Service.

• Unemployment benefits and Medicare doctors: As of Sunday afternoon, negotiators had not yet determined how to deal with these twin extensions, including how or whether to offset the costs. Extending unemployment benefits for a year would cost $30 billion, according to the Congressional Budget Office. The agency says averting a Medicare pay cut would mean $25 billion.

Durbin said that at one point Republicans had suggested paying for the one-year extensions with savings from switching to the "chained CPI" as a measure of cost of living. Democrats balked at the idea, in part because they would be agreeing to a permanent benefit cut (from the new CPI) in exchange for temporary, one-year benefits extensions. On Sunday, Senate Republicans told reporters that the chained CPI was no longer on the table in these talks, adding to questions about funding for the unemployment and Medicare doctor fixes.

• Sequester: CNN learned on Sunday from Democratic and Republican senators that Democrats at one point suggested postponing or delaying the sequester for one or two years. Republicans exiting their caucus meeting Sunday afternoon, including Snowe and Sen. Bob Corker of Tennessee indicated the idea was a non-starter with their party, largely out of fear that the sequester delay would not be offset and would add to the deficit.