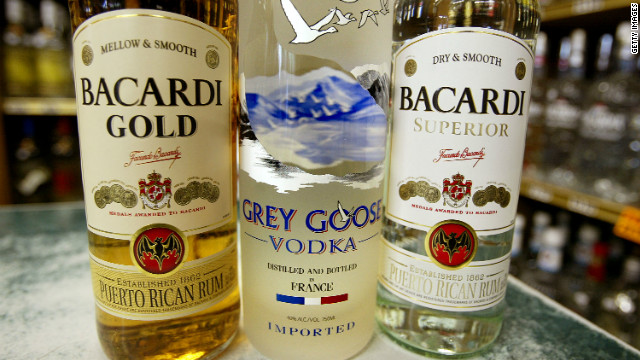 Of course, there are the widely-known sticking points the two sides have been haggling over for weeks: extensions of the income tax cuts for middle and low-income earners, the current estate tax rate, and the alternative minimum tax.
END_OF_DOCUMENT_TOKEN_TO_BE_REPLACED

The full statement from Trumka is after the jump.
END_OF_DOCUMENT_TOKEN_TO_BE_REPLACED

5 things to know about the fiscal cliff

(CNN) - It's complex, dense, and filled with compromise. And the deal passed by the Senate to avert the "fiscal cliff" might not even become law, depending what actions the House takes.

Here are five things to know about the bill that passed the Senate overwhelmingly in the middle of the night.

Washington (CNN) - The White House sent supporters talking points on the Senate-passed fiscal cliff deal which tout the middle class tax rate extension, the "balance" of spending cuts and tax increases, temporary suspension of the sequester, and other successes for the Obama administration.

The full topline talking points, obtained by CNN, are below the jump.
END_OF_DOCUMENT_TOKEN_TO_BE_REPLACED 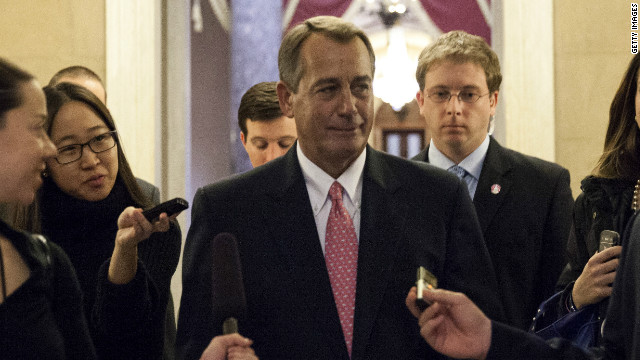 (CNN) - With bipartisan support, the House approved the fiscal cliff bill late Tuesday night after Republican leaders ultimately decided not to try and tack on an amendment to the Senate version of the legislation, which passed in the upper chamber around 2 a.m. ET Tuesday morning.

Shortly after the House approved the bill, President Barack Obama delivered a statement at the White House, saying he will sign the legislation. Check back here for the latest updates.

11:30 p.m. ET - Obama will depart the White House late Tuesday, the White House announced, to resume his vacation in Hawaii. He left his family on the island last week, putting his vacation on hold and returning to Washington to deal with the fiscal cliff negotiations.

"The one thing that I think hopefully in the new year we'll focus on is seeing if we can put a package like this together with a little bit less drama, a little bit less brinksmanship, not scare the heck out of folks quite as much. We can come together as Democrats and Republicans to cut spending and raise revenue in a way that reduces our deficit, protects the middle class and provides ladders into the middle class for everybody who is willing to work hard," he said.

11:24 p.m. ET - “While I will negotiate over many things, I will not have another debate with this Congress over whether or not they should pay the bills that they've already racked up through the laws that they passed,” Obama said, referring to the upcoming debt ceiling debate.

11:21 p.m. ET - "I will sign a law that raises taxes on the wealthiest 2% of Americans while preventing a middle class tax hike that could have sent the economy back into recession and obviously had a severe impact on families all across America," Obama said.

11:20 p.m. ET - In the White House Press Briefing Room, President Barack Obama said the central premise of his campaign for president was to change the tax code that was "too skewed towards the wealthy at the expense of middle class Americans."

"Tonight we have done that," he added, thanking the leaders of the House and Senate. He also thanked Vice President Joe Biden, a chief negotiator in the talks.

11:19 p.m. ET - Erskine Bowles and Alan Simpson, the bi-partisan co-chairs of Obama’s deficit reduction commission, said in a statement after the vote that the deal “is truly a missed opportunity to do something big to reduce our long term fiscal problems, but it is a small step forward in our efforts to reduce the federal deficit.”

“Washington missed this magic moment to do something big to reduce the deficit, reform our tax code, and fix our entitlement programs,” the said. “We have all known for over a year that this fiscal cliff was coming. In fact Washington politicians set it up to force themselves to seriously deal with our Nation's long term fiscal problems. Yet even after taking the country to the brink of economic disaster, Washington still could not forge a common sense bipartisan consensus on a plan that stabilizes the debt.”

After the commission submitted a report which was received coolly by the president, who did not work to turn its recommendations into law, the two founded the group Fix the Debt. Among other things, the group released a web video in which Simpson performed the “Gangnam style” dance.

"Politicians from both parties have an addiction to overspending and they must face it now-not at midnight the day before another so-called “deadline” approaches. We will continue to stand up for fiscal responsibility – even if we are the last ones standing," Jenny Beth Martin said in a statement.

11:12 p.m. ET - From CNN's Dan Merica: Rep. Paul Ryan, the House Budget Committee chairman who voted yes on the fiscal cliff deal, told reporters he cast his vote because, "If you want a bill to pass, you should vote for it."

Why did you want it to pass, he was asked. "I am not afraid of anything, I think it needed to pass."

Because? "Because it needed to pass. I wanted to stop a big tax increase," he said.

10:57 p.m. ET - The U.S. House of Representatives approves fiscal cliff deal, surpassing the 217 votes needed for passage. The final breakdown is 257 in support and 167 in opposition.

END_OF_DOCUMENT_TOKEN_TO_BE_REPLACED

Senators with eye on 2016 vote against cliff deal

(CNN) - After months of uncertainly, the U.S. Senate passed a last-minute deal Tuesday to avert the year-end fiscal cliff. The measure passed overwhelmingly 89-8. So which senators said no? Here's a list:
END_OF_DOCUMENT_TOKEN_TO_BE_REPLACED 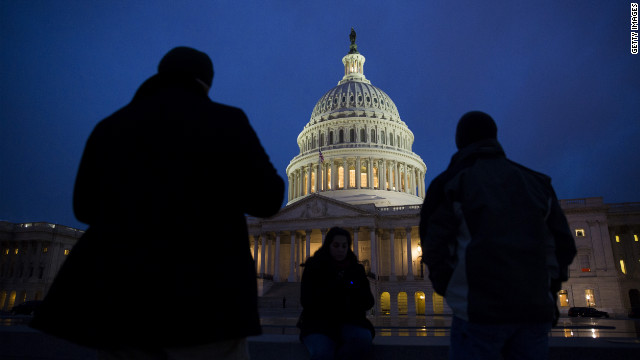 New York (CNNMoney) - Think the fiscal cliff is causing uncertainty and holding back the economy? How about three more cliff-like deadlines over the next three months?

That's what's in store if Congress adopts the deal under consideration. The proposal at hand on Capitol Hill doesn't address the debt ceiling and temporarily puts off most of the automatic spending cuts otherwise set to take effect Wednesday.

(CNN) - A full two hours after a midnight deadline, the Senate overwhelmingly passed a last-minute deal Tuesday to avert the feared fiscal cliff on a 89-8 vote.

CNN: Senate passes package to avert fiscal cliff; House votes next
A full two hours after a midnight deadline, the Senate overwhelmingly passed a last-minute deal to avert the feared fiscal cliff on an 89-8 vote. The Senate package would put off budget cuts for two months and preserve Bush-era income tax cuts for individuals earning less than $400,000 or couples earning less than $450,000.

CNN Security Clearance: Report blames poor security, inadequate response in Benghazi attack
Terrorists in Benghazi, Libya, "essentially walked right into the Benghazi compound unimpeded and set it ablaze," a special Senate report on the September 11 attack that killed a U.S. ambassador and three other Americans says. The bipartisan report, "Flashing Red: A Special Report on the Terrorist Attack at Benghazi," released Monday by the Senate Committee on Homeland Security and Government Affairs, cites "extremely poor security in a threat environment that was 'flashing red.' "

END_OF_DOCUMENT_TOKEN_TO_BE_REPLACED

Washington (CNN) - Fiscal cliff negotiations between the White House and Congressional leaders involved late-night discussions in the Oval Office and an ultimate hardline from President Barack Obama, according to a source familiar with the process.

President Obama wanted a delay to the massive spending cuts known as the "sequester," but Republicans requested the final deal to include measures to offset what delaying those budget cuts would add to the deficit.