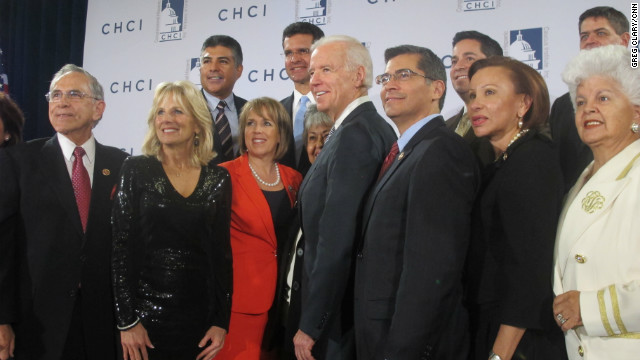 Biden: Republicans had 'epiphany' on immigration

Washington (CNN) - Vice President Joe Biden said Republicans have had a major realization in their approach to immigration reform in recent weeks.

"Have you ever seen a time when Republicans have had a more rapid epiphany about immigration than they have this last election?" Biden said Thursday while speaking at an event for the Congressional Hispanic Caucus Institute in Washington.

His comments came nearly two months after President Barack Obama won 71% of the Latino vote, while Republican presidential nominee Mitt Romney took 27%. According to exit polls, 10% of the 2012 electorate was Hispanic, marking the first time the voting bloc reached a double-digit figure. In 2008, they represented 9% of the electorate.

In the weeks that followed, many in the GOP took to the airwaves and argued that the party needed to change its messaging and outreach to Latinos, including its approach on immigration.

Biden pointed to Obama's directive last year that allowed certain people younger than 30 who came to the United States before the age of 16 to apply for a two-year deferral of deportation. The policy was announced in June and went into effect in August.

Despite some sharp Republican opposition to Obama's immigration shift at the time, Biden argued that "there was no blowback" among the general public.

"It's finally happened," Biden said. "The American people have begun to understand not only the great contributions made, but the awesome potential, future potential of the Hispanic community."

"You're the center of this nation's future," he later added.

His comments came on the first day of the 113th Congress, which includes 31 Latinos in the freshman class for both chambers. At the event Thursday evening, Biden led a ceremonial swearing-in for Hispanic lawmakers.

The vice president, who has not squashed speculation that he may run for president in 2016, stressed that in order "to make sure there is no going back," Hispanics should tell Republicans "that if you ignore the needs and concerns of the Hispanic people, you will not win. You will not win."