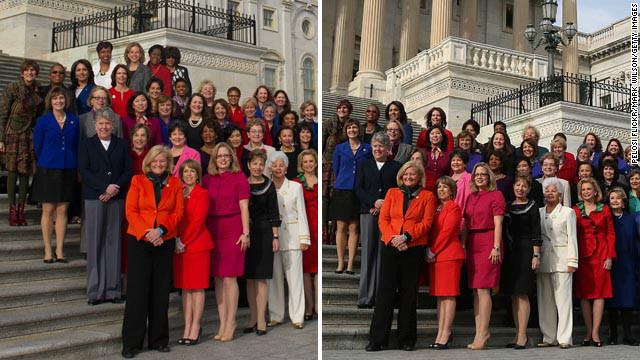 Not to be frozen out: Pelosi explains 'Photoshopped' photo

(CNN) - It's a historical photo which shows the 61 Democratic Congresswomen who were sworn in on Thursday.

Except it never (fully) happened.

Pelosi explained why the photo her office released and posted online shows four more faces - all members of Congress - than does one taken by other photographers at the photo opportunity.

"Is that what they did?" she asked when a reporter questioned her about the apparent technical addition - "Photoshopping" - of (left to right) Reps. Yvette Clarke, Debbie Wasserman Schultz, Shelia Jackson Lee, and Corrine Brown to the official photo.

"And also is an accurate record that it was freezing cold, and our members had been waiting a long time for everyone to arrive, and that I had to get back into the building to greet constituents, family members to get ready to the - go to the floor," she said a press conference. "It wasn't like we had the rest of the day to stand there."

Instead of holding the entire group for the absent four members, Reps. Clarke, Wasserman Schultz, Lee, and Brown posed for a separate photo together, which was apparently added to the official photo. 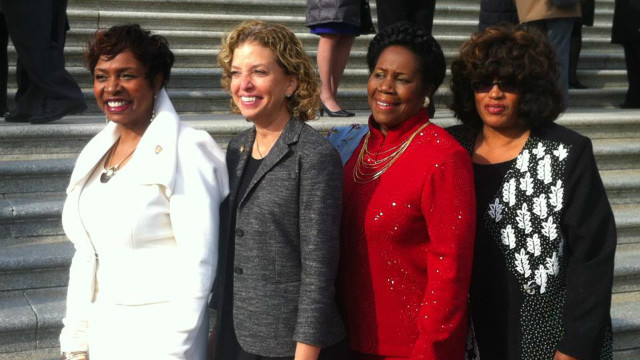 Pelosi said the photo "was an accurate reflection of who the 61 members - the Democratic women members of Congress are."

"And not only were they women, but they reflected the beautiful diversity of our - our country. Women who are - from every community, as well as every religious faith. So we were pretty excited about it," she said.