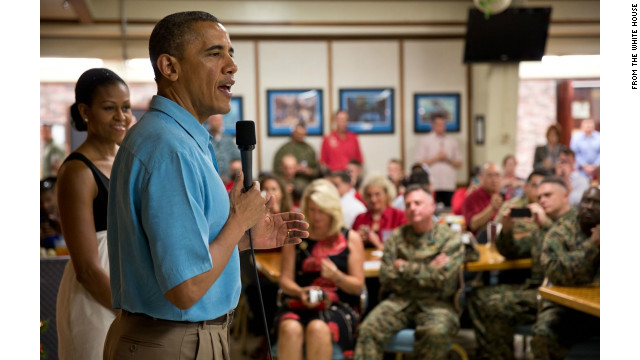 (CNN) - About 90 minutes after publicly berating lawmakers for failing to reach a fiscal cliff deal before the holidays, President Barack Obama flew out of Washington. He landed in Hawaii 11 hours later - over 4,000 miles from Capitol Hill, and where the temperature was a balmy 80 degrees, twice what it was in Washington.

"As we leave town for a few days, I hope it gives everyone perspective," he said in those remarks on December 21, two weeks ago. "Everybody can drink some eggnog, have some Christmas cookies, sing some Christmas carols, enjoy the company of loved ones."

Obama's Hawaiian vacation, an annual tradition, comes to an end on Saturday after nine days.

The fiscal cliff proved inescapable: The effort to reach a deal, which eventually passed the Senate and House, called him back to D.C. the day after Christmas.

But his haste to return to Hawaii, Obama rushed to the podium even faster than before. He spoke about 20 minutes after the House approved the measure, and took off to resume his vacation less than an hour after the vote concluded.

While in the Aloha State, the president made few appearances in public, though he fit in at least five rounds of golf and worked out at the Marine Corps Base Hawaii gym nearly daily.

He stayed with his family at a house in Kailua on the island of Oahu, the third largest of the state's 132 islands.

Information about his trip comes from reporters who traveled with the president and from the White House. Obama's house was not visible from the location where reporters were allowed to work.

Among the restaurants Obama visited was one run by the chef Masaharu Morimoto of television fame. Obama made several dinner outings with his wife and friends.

Later that day he visited service members and their families at the Marine base.

"This is where I was born and so we come back for the holidays, but one of our favorite things is always coming to the base on Christmas Day and having a chance just to meet you, those of you who have families here, " he said, according to reporters who were allowed to watch his brief remarks, “and to say thanks for the extraordinary work and service that you guys do each and every day."

The Obamas also went on hiking outings and visited the beach at least twice.

Between time with his family came presidential responsibilities. The White House said that Obama received a daily briefing ands placed calls to Gov. Andrew Cuomo of New York and Gov. Chris Christie of New Jersey regarding the Superstorm Sandy relief measure, which was working its way through Congress.

Obama also called the leadership of the new Congress to offer congratulations, the White House said.

On Thursday, he went bowling with his daughters and took them out for shave ice, the Hawaiian dessert treat. The White House only said the Obamas ordered "an assortment of flavors."

The pool reporter traveling with the president noted, "No details about strikes, spares, turkeys or other notable bowling feats were provided."

Obama is expected to leave the island late Saturday. He returns to Washington with several pressing issues on his plate, including the federal government’s debt ceiling. The president is also expected to make announcements on Cabinet positions soon.