Washington (CNN) - U.S. Secretary of State Hillary Clinton returned to work Monday morning for the first time since she was sidelined by illness, a concussion and a blood clot, according to a schedule released by the State Department.

According to the department's weekly schedule, Clinton held a meeting with assistant secretaries of state at 9:15 a.m. ET Monday. On Tuesday she'll meet with outgoing Defense Secretary Leon Panetta and National Security Adviser Tom Donilon at the White House before attending meetings with ambassadors at the State Department. On Friday Clinton will participate in events surrounding Afghan President Hamid Karzai's visit to Washington. 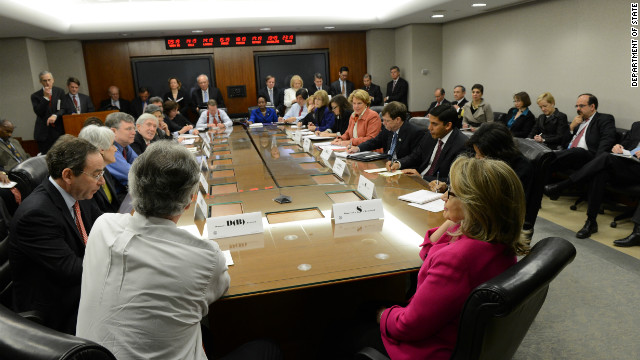 The secretary was discharged from a New York hospital Wednesday, three days after she was admitted for the treatment of a blood clot in a vein between her skull and brain. Doctors found the clot during a medical test related to a concussion she suffered in December, which she sustained after fainting from dehydration caused by the flu.

Clinton was treated with blood thinners to dissolve the clot, which did not cause a stroke or any neurological damage.

On Friday, department spokeswoman Victoria Nuland described Clinton's condition after her release as "upbeat" and "raring to go" and said Clinton was planning to return to work at the State Department this week.

Nuland was asked earlier in the week how Clinton's illness might affect her plans to testify on Capitol Hill about the deadly September terror attack on the U.S. Consulate in Benghazi, Libya. Nuland did not directly say whether Clinton would appear.

"She has said that she is open to going up to the Hill. We are working with them now on their schedule because there's also a question of when they are going to be in, and we will let you know when we have something to share," Nuland said.

Clinton, a former first lady, New York senator and presidential candidate, does not plan to stay on for President Barack Obama's second term but prefers to remain until her replacement is in place.

Some senators have said they would delay confirmation hearings for her proposed successor, Sen. John Kerry, until Clinton has testified on the Libya attack that killed Ambassador J. Christopher Stevens and three other Americans.

The House and Senate have both adjourned until mid-January, and no Congressional hearings were listed on the State Department schedule released Sunday.

CNN's Jill Dougherty and Kevin Liptak contributed to this report.