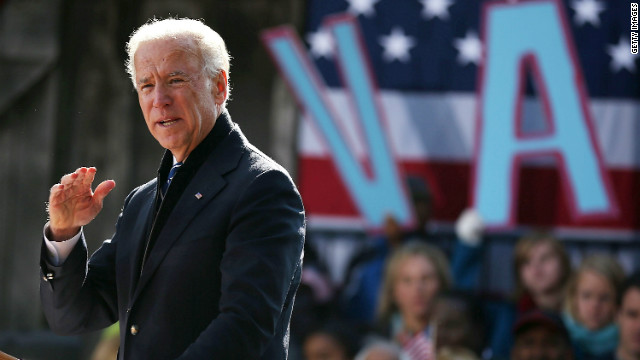 IN SEARCH OF GUN LEGISLATION: VP BIDEN TO MEET WITH GUN VIOLENCE STAKEHOLDERS THIS WEEK… CNN’s Brianna Keilar and Kevin Bohn report: “On Wednesday, the vice president will meet with victims’ groups and gun safety organizations. On Thursday, the vice president will hold meetings with advocates for sportsmen and women and gun ownership groups,” according to a senior administration official. “The vice president also will meet this week with representatives of the entertainment and video game industries. In addition, the vice president will hold conference calls with elected officials from across the country.” Shortly after those meetings, Biden will make recommendations to President Barack Obama, according to the source, and the president will put them into a package that he “intends to push without delay.” An NRA spokesman said that a legislative executive with the group will represent it at the White House on Wednesday, an association spokesman said.

TRAIL TRIVIA
(Answer below)
On this day, the first State of the Union was delivered. Since Washington wasn’t the U.S. capital at the time, where was the speech given?

The deadly Benghazi terrorist attack that dashed U.N. Ambassador Susan Rice’s chances to be secretary of state now might delay the confirmation of John Brennan as CIA director.

A threat just hours ago by Sen. Lindsey Graham to place a hold on Brennan’s nomination caught our eye, even as most people remained focused on former Republican Sen. Chuck Hagel’s nomination as defense secretary. While President Barack Obama’s decision to choose Hagel has drawn opposition from Democrats and Republicans, no one has talked about putting the brakes on the nomination.

Graham made it clear that he is not questioning Brennan’s qualifications to lead the CIA, but is making it clear that he hasn’t forgotten about the Benghazi attack and how the White House handled it.

“My support for a delay in confirmation is not directed at Mr. Brennan, but is an unfortunate yet necessary action to get information from this administration,” Graham said in a statement. A Graham spokesman told CNN that the South Carolina Republican has not officially placed a hold on Brennan’s nomination, but added that it was “a real possibility.”

Specifically, Graham wants answers on who changed the talking points that Rice used in several media appearances following the attack.

It looks like we are now engaged in a game of political chicken and we will be watching closely to see which side flinches first.

Leading CNNPolitics: Back in office, House members get second chance
Of the 84 House freshmen who unpacked new offices last week, some of them are intimately familiar with doing the opposite - packing up and moving out of the Capitol. Nine members of the new class are former members of Congress who left Capitol Hill by choice or by force of the ballot box. Redrawn congressional districts helped some of them get back; others had a change of heart after leaving voluntarily. Though each used the two-year hiatus differently, many say the same thing about returning: The election losses were somewhat beyond their control and they plan on being the same people they were when they last served. – Dan Merica

Leading Drudge: British Host Mocks 'Scary' Americans
CNN host Piers Morgan just called to discuss his interview last night with Alex Jones, the conservative radio host and gun advocate who went on a tirade against Morgan, gun control legislation, and a litany of government conspiracies. "He was the best advertisement for gun control you could wish for," Morgan told POLITICO. – Dylan Byers for Politico

Leading HuffPo: Boo Hoo
Americans are largely split in their reaction to the "fiscal cliff" agreement, but united in their dislike for the role played by House Speaker John Boehner (R-Ohio), according to a Washington Post/ABC poll released Tuesday. Americans were divided on the fiscal cliff agreement, with 45 percent approving and 38 percent disapproving, although far more strongly disapproved than strongly approved. Democrats were more than twice as likely as Republicans to approve of the deal. Women, minorities and those with lower incomes were likely to support the deal, while other groups were more divided, according to ABC. – Ariel Edwards-Levy

Leading Politico: The 'hell no' caucus
Freshman Rep. Tom Cotton, a veteran of two wars and with a pair of Harvard degrees, got a pleasant surprise last year that helped him win a very competitive Republican primary — and then a very easy general election. It was a FedEx envelope full of checks that he didn’t ask for, from a group he hardly knew — the Club for Growth. Tucked inside that envelope and several to come were $300,000 in checks from Club members, enough to help lift the 35-year-old former Army captain from obscurity — and 47 percentage points down in his first internal poll — to the fourth floor of the Cannon House Office Building. The Republican’s district, the Arkansas 4th, is home to 33 rural counties — and a conservative America that the media and much of the Republican establishment are struggling to comprehend. – Jim Vandehei and Mike Allen

Leading The New York Times: After Newtown, Congress Must Act on Guns, Pelosi Says
As she begins her second Congress as leader of the opposition in the House, Representative Nancy Pelosi of California is confident that Democrats will get behind President Obama on the big clashes with Republicans. But she thinks the president should aggressively line up much wider support for raising the federal debt limit and enacting new gun rules. – Carl Hulse

- Rush plants the seed and -
RADIO HOST RUSH LIMBAUGH ON HIS SYNDICATED RADIO SHOW: “The Washington Post has noticed that every Obama appointee is a white guy. There aren't any women. The women are being dispatched. Lisa Jackson over the EPA, Susan Rice, no más. She's gone. We don't hear much from Valerie Jarrett. We don't hear from Michelle (My Belle). The Cabinet and the czarinaship - well, there are no czarinas. It's all white males in the Obama camp. And of course the Washington Post, they don't criticize or condemn it. They just sort of scratch their heads in curiosity as they notice it. It must be an oversight on the part of Obama, because he's a good liberal. He's into diversity. So it can't be something that's conscious.”

- … Carney defends White House diversity… -
PRESS SECRETARY JAY CARNEY AT THE WHITE HOUSE BRIEFING: “The president values diversity, believes it's important because it enhances the quality of the pool of potential nominees for positions across the administration. He believes by looking broadly for candidates for offices that he ups the chances that he will find the very best person for the job.”

- Connect the dots… Ohio governor opts not to run in 2014 -
TED STRICKLAND, DEMOCRATIC GOVERNOR OF OHIO, IN A WRITTEN STATEMENT: “Today, I am announcing my decision not to seek election as governor of Ohio in 2014. In many ways, this has been a very difficult decision. … We were leaders in investments, in alternatives sources of energy and went to bat for the automobile industry; working closely with President Obama on the rescue plan that has been so pivotal in Ohio’s economic recovery.”

Gut Check Flashback from Friday: The White House is believed to be searching for a person with business expertise to run the Commerce Department, but there seems to be no first-in-line name circulating at this point. Gene Sperling is expected to stay as Director of the National Economic Council. Former Washington state Gov. Christine Gregoire, former Ohio Gov. Ted Strickland and former Michigan Gov. Jennifer Granholm are also being considered for Cabinet posts. –Gloria Borger LINK

- While visiting Israel, Sen. Paul calls for less U.S. foreign aid -
REPUBLICAN SEN. RAND PAUL OF KENTUCKY IN A SPEECH TO THE JERUSALEM INSTITUTE FOR MARKET STUDIES: “It will be harder to defend Israel if we destroy our country in the process. I think there will be significant repercussions to running massive deficits. … To me it has always been about whether it makes sense for me to borrow money from China to give to Pakistan.”

At Federal Hall in New York City, George Washington delivered the first State of the Union on this day in 1790.

“I embrace with great satisfaction the opportunity which now presents itself of congratulating you on the present favorable prospects of our public affairs,” Washington said at the outset of his speech. “The recent accession of the important state of North Carolina to the Constitution of the United States, the rising credit and respectability of our country, the general and increasing good will toward the government of the Union, and the concord, peace, and plenty with which we are blessed are circumstances auspicious in an eminent degree to our national prosperity.”

In delivering this speech, Washington was satisfying Article II, Section 3 of the Constitution. “…from time to time,” reads the Constitution, “give to the Congress Information of the State of the Union, and recommend to their consideration such Measures as he shall judge necessary and expedient.”

After laying out the past victories of the Washington government, the first president gave a brief outline of the administration’s policies going forward. Not only did he discuss the importance of preserving peace, but he hinted at the establishment of a standing army.

Prior to Lyndon B. Johnson, the speeches had been delivered during the day. But in 1965, Johnson gave his speech in the evening.