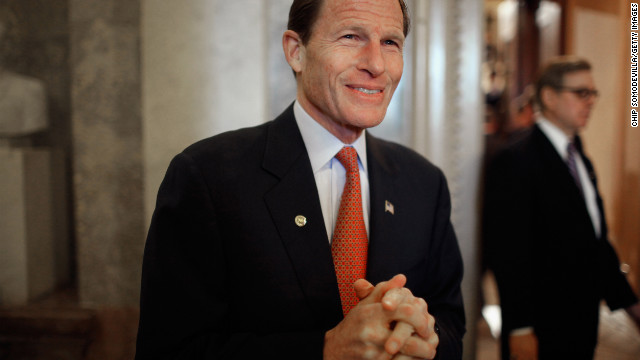 Washington (CNN) - In the wake of the Newtown, Connecticut school shooting, one of the state's senators announced Tuesday he will introduce legislation requiring background checks to buy ammunition.

"Ammunition is now the black hole in gun violence prevention," Democratic Sen. Richard Blumenthal said. Blumenthal said it is illegal to sell either guns or ammunition to certain groups of people including felons, the mentally ill and those who commit domestic violence. But under current law someone can buy bullets from a gun store without any review of the person's background.

During a conference call with reporters, Blumenthal said later this month he will introduce the Ammunition Background Check Act of 2013. He said the legislation will also require a seller to alert law enforcement when a customer buys more than 1,000 rounds of ammunition during a five day period. In addition, the bill calls for a ban on Teflon-coated bullets and incendiary ammunition designed to ignite or explode on contact.

"There is no rational reason why a person can walk into a store, fill their shopping cart with hundreds of rounds of ammo, pay up, and walk out without so much as giving their name," said Blumenthal.

Blumenthal said ammunition background checks could be done through the FBI's National Instant Background Check system known as NICS, which currently runs checks on gun purchases. The Connecticut Democrat noted that the FBI has run more than 100 million background checks and prevented 700,000 people from buying guns.

Blumenthal said he plans to introduce other pieces of gun legislation in the future.

Blumenthal was asked why he is introducing legislation now rather than wait to see what proposals come out of the gun violence task force chaired by Vice President Joe Biden. He said his effort does not preclude a larger effort.