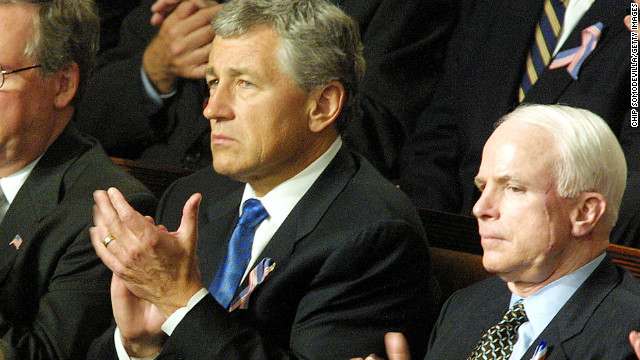 Washington (CNN) – In 2000, Chuck Hagel and John McCain were both serving as Republican senators, each with a reputation as a Vietnam War hero unafraid of bucking his own party.

That year, Hagel broke with most of his fellow GOP senators to back McCain's bid for the GOP presidential nomination, which he ultimately lost to George W. Bush. While introducing McCain's speech at the 2000 GOP convention in Philadelphia, Hagel lauded the Arizona lawmaker as "a great Republican (and) a great American leader."

In 2006, while preparing for another run for the White House, McCain told the New York Times: "I'd be honored to have Chuck with me in any capacity. He'd make a great secretary of state."

But Hagel didn't endorse McCain that time around, and now, he's preparing to become secretary of defense for President Barack Obama, McCain's 2008 opponent. Perhaps unsurprisingly, the two are no longer each other's cheerleader.

"My biggest concern is his overall attitude about the United States, our role in the world, particularly in the Middle East, and whether we should reduce the Pentagon further, but mainly, his general, overall worldview," McCain said Tuesday on CNN's "The Situation Room with Wolf Blitzer."

Chief among McCain's concerns is Hagel's 2007 position opposing the surge of troops in Iraq, which McCain supported. McCain said Hagel told him the surge would be "the most dangerous foreign policy blunder in this country since Vietnam."

"I've never heard him contradict that statement or change his position about the surge," McCain said, labeling Hagel's description of the troop increase "a gross misconception of America's roles there and in the world."

He also took issue with votes Hagel cast in the Senate blocking a set of sanctions against Iran, which other Republicans have homed in on as Hagel prepares for confirmation hearings that are set to begin later this month.

"Basically he took a view of the Iranian threat, which I don't think has been justified by events that have followed," McCain said.

But what about the friendship forged in shared battles, both in Vietnam and on Capitol Hill?

"The friendship, I hope, is still there," McCain said. "But our views began to diverge rather dramatically about the role of the United States in the world."

"I respect, admire, and call him a friend, but I have very serious questions about whether he will serve in the way that I think serve America's best national interests," McCain added. "I want to have hearings; I would like to hear him make his case and I will reserve judgment."