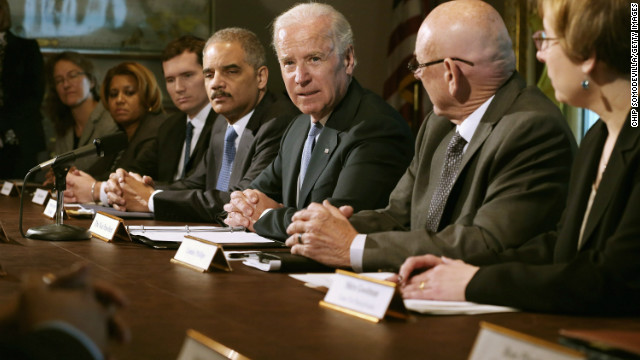 One theme brought up by several participants was the "moral tragedy" reflected in the gun violence the nation has seen over the past several months.

According to Rev. Michael McBride, one of the attendees, the vice president talked about the moral imperative to take action.

"He was asking the faith community to use the power of our moral voices and persuasion" to help find common sense solutions, McBride said.

He spoke at the session about the tragedy of urban violence and ways to prevent it.

Biden reiterated to the group what he mentioned publicly Wednesday: the administration will be pursuing initiatives on two tracks, legislative and executive. The latter would see faster action because it is within the president's unilateral control.

In the meeting, he did not offer specifics on what type of measures the committee was contemplating. The topics of background checks, assault weapon bans and mental health were discussed, and the vice president mentioned those three as some of the most talked about subjects so far in his various committee sessions.

Leaders of the Catholic, Protestant, Jewish, Muslim, Sikh and Hindu religions, as well as Evangelical and Pentecostal Christian communities, were represented. Among other topics they raised: protection of religious buildings and religious intolerance.