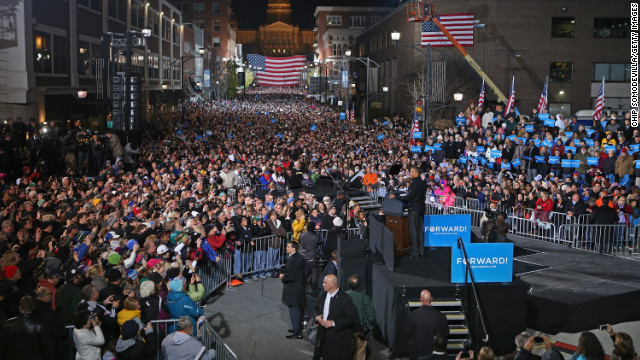 Obama political machine to be fired up, ready to go for second term

Washington (CNN) – President Barack Obama’s campaign operation is about to be fired back up just a few months after helping him win a second term with a new mission to assist the president in promoting his top legislative goals and progressive issues.

Senior Obama campaign aides are currently working on the specifics of how to restructure Obama for America, but are considering several different options such as converting it to a 501c4 or perhaps a super PAC, a source familiar with the campaign said.

The new campaign organization will be headed by Jim Messina, Obama’s campaign manager who oversaw the president’s victory over Republican Mitt Romney in November. Messina, Stephanie Cutter, Jennifer O'Malley Dillon and several other top Obama aides are working out the details.

“After the election, it was clear from the conversations with supporters that they wanted to continue the progress we made in the first four years and continue it together,” said the source, who spoke on condition of anonymity.

In addition to a national grassroots infrastructure, the campaign also maintains a massive email list that it can use to mobilize supporters and seek donations. The Obama campaign won’t discuss how large the email list is, but a source said that it is “much bigger than the 14 million email addresses” it had amassed after the 2008 campaign. The campaign also made a concerted effort to collect cell phone numbers and throughout the campaign frequently used text messaging to fundraise and organize volunteers.

It is expected that the new organization will be formally announced at a meeting of Obama staff, supporters and volunteers that is scheduled to take place next weekend before Obama takes the oath of office.